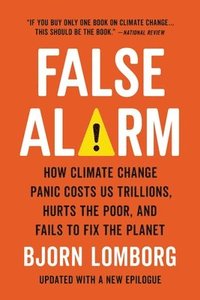 How Climate Change Panic Costs Us Trillions, Hurts the Poor, and Fails to Fix the Planet

av Bjorn Lomborg
(1 röst)
Häftad Engelska, 2021-10-19
182
Köp
Spara som favorit
Finns även som
Visa alla 1 format & utgåvor
The New York Times-bestselling "skeptical environmentalist" argues that panic over climate change is causing more harm than good Hurricanes batter our coasts. Wildfires rage across the American West. Glaciers collapse in the Artic. Politicians, activists, and the media espouse a common message: climate change is destroying the planet, and we must take drastic action immediately to stop it. Children panic about their future, and adults wonder if it is even ethical to bring new life into the world. Enough, argues bestselling author Bjorn Lomborg. Climate change is real, but it's not the apocalyptic threat that we've been told it is. Projections of Earth's imminent demise are based on bad science and even worse economics. In panic, world leaders have committed to wildly expensive but largely ineffective policies that hamper growth and crowd out more pressing investments in human capital, from immunization to education. False Alarm will convince you that everything you think about climate change is wrong -- and points the way toward making the world a vastly better, if slightly warmer, place for us all.
Visa hela texten

Bjorn Lomborg is the bestselling author of The Skeptical Environmentalist and Cool It. He is a visiting professor at Copenhagen Business School and at the Hoover Institution at Stanford. His work appears regularly in the New York Times, Wall Street Journal, the Economist, the Atlantic, and Forbes. His monthly column appears in around forty papers in nineteen languages, with more than thirty million readers. Time magazine has named him one of the 100 Most Influential People of the World, and Foreign Policy has repeatedly called him one of the Top 10 Global Thinkers. The Guardian identified him as "one of the 50 people who could save the planet." He lives in Sweden.