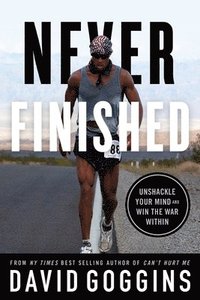 Unshackle Your Mind and Win the War Within

Can't Hurt Me, David Goggins' smash hit memoir, demonstrated how much untapped ability we all have but was merely an introduction to the power of the mind. In Never Finished, Goggins takes you inside his Mental Lab, where he developed the philosophy, psychology, and strategies that enabled him to learn that what he thought was his limit was only his beginning and that the quest for greatness is unending.

The stories and lessons in this raw, revealing, unflinching memoir offer the reader a blueprint they can use to climb from the bottom of the barrel into a whole new stratosphere that once seemed unattainable. Whether you feel off-course in life, are looking to maximize your potential or drain your soul to break through your so-called glass ceiling, this is the only book you will ever need.

"There are levels to mental strength, and the undisputed gold standard is my friend David Goggins.

The combination of the superhuman spectacle of his accomplishments and the immense gravity of his words serves as one of the most potent motivational drugs that exist on God's green earth.

He's a man who came from a humble and troubled childhood and, through the force of sheer will, forged himself into one of the hardest motherf#ckers that's ever lived. I believe there are people that are put here to elevate our expectations and redefine what's possible for the rest of us, and David Goggins is the best example of that idea that I've ever come across in my life."

"David Goggins is a rare breed of human being. His committment to the philosophy of "achieving your greatness by giving life all you got" through mental toughness and self discipline has been an anchor of inspiration and motivation to millions around the world-myself included. To me, what makes David rare isn't his elite U.S. Navy SEAL career or his record-breaking endurance events as an athlete. What makes him rare is, from the day we connected, he's always been a real guy who shoots from the hip and speaks from the heart. And that's what matters most. Hardest workers in the room."

"I did not pick David up when he fell, but he did pick me up every time I fell.

David has purposefully and meticulously scrutinized every morbidly ugly aspect of our lives and of his life with raw, brutal, and oftentimes painful honesty. By sharing his life experiences, he has given all of us a blueprint on not only how to pick ourselves up but also how to excel in the face of overwhelming adversity and "stay hard" in the process."