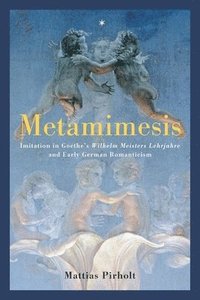 av Mattias Pirholt
Inbunden Engelska, 2012-11-01
1054
Köp
Spara som favorit
Reconsiders the role played by mimesis - and by Goethe's Wilhelm Meister as a mimetic work - in the novels of Early German Romanticism. Mimesis, or the imitation of nature, is one of the most important concepts in eighteenth-century German literary aesthetics. As the century progressed, classical mimeticism came increasingly under attack, though it also held its position in the works of Goethe, Schiller, and Moritz. Much recent scholarship construes Early German Romanticism's refutation of mimeticism as its single distinguishing trait: the Romantics' conception of art as the very negationof the ideal of imitation. In this view, the Romantics saw art as production (poiesis): imaginative, musical, transcendent. Mattias Pirholt's book not only problematizes this view of Romanticism, but also shows that reflections on mimesis are foundational for the German Romantic novel, as is Goethe's great pre-Romantic novel Wilhelm Meister's Apprenticeship. Among the novels examined are Friedrich Schlegel's Lucinde, shown to be transgressive in its use of the aesthetics of imitation; Novalis's Heinrich von Ofterdingen, interpreted as an attempt to construct the novel as a self-imitating world; and Clemens Brentano's Godwi, seen to signal the endof Early Romanticism, both fulfilling and ironically deconstructing the self-reflective mimeticism of the novels that came before it. Mattias Pirholt is a Research Fellow in the Department of Literature at Uppsala University, Sweden.
Visa hela texten

Pirholt 'brings together semiotics and politics' (p. 178) in Romanticism in a hitherto unseen way. He has written a brief, yet difficult book that in its best places -- these are many -- recalls Bengt Algot Sorensen's seminal work on aesthetic theory in the eighteenth century. * ORBIS LITTERARUM * What [the] ancient intellectual tradition [of mimesis], and later Goethe and the Romantics (whose work Pirholt compellingly explores), all have in common is the priority -- and the differing inflections -- they give to the imagination. JOURNAL OF EUROPEAN STUDIES Pirholt . . . shows his brilliance . . . with his virtuosic explications de texte. His 'intertextual' sense must also be emphasized, for instance in his subtle sounding of Brentano's reworking of Ovid's myth of Narcissus and Echo. * GERMAN STUDIES REVIEW *