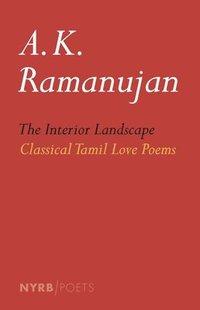 av A K Ramanujan
Häftad Engelska, 2014-01-14
166
Köp
Spara som favorit
Kan tyvärr inte levereras innan julafton.
In The Interior Landscape the great Indian poet and translator A.K. Ramanujan has drawn on a celebrated anthology of classical Tamil poetry to compose an unforgettable sequence of love poems. The story unfolds in a series of dramatic exchanges between a shifting array of characters-the lovers, relatives, friends, rivals, and sundry passersby-and as it does we are conducted through five phases of love, from first meeting, anxiety, infidelity and separation to final union, each associated with a lush interior landscape of its own. Immersed in the glories of the natural world, the poems evoke the whole spectrum of love while also capturing the gossip and wisecracking of those who look on from outside.
Visa hela texten

"With The Interior Landscape, Ramanujan uncovered ancient Tamil literature for the world beyond and, being not only a scholar but a poet himself, his English versions proved the original to be exquisite poetry." -- Girish Karnad "It is difficult to overestimate the importance of The Interior Landscape... It showed that translation called for as much in the way of creativity as it did in the way of scholarship." -- - Nakul Krishna, The Caravan "Seekers after happiness should turn to Ramanujan's Interior Landscape." -- - Arvind Krishna Mehrotra, from Partial Recall "In their antiquity and in their contemporaneity, there is not much else in any Indian literature equal to these quiet and dramatic Tamil poems. In their values and stances, they represent a mature classical poetry: passion is balanced by courtesy, transparency by ironies and nuances of design, impersonality by vivid detail, leanness of line by richness of implication. These poems are not just the earliest evidence of the Tamil genius. The Tamils, in all their two thousand years of literary effort, wrote nothing better." -- -A. K. Ramanujan, from the afterword

A. K. RAMANUJAN (1929-1993) was born Attipat Krishnaswami Ramanujan in Mysore, India, the second of six children. A Tamil Brahmin of the Sri Vaishnava caste, Ramanujan grew up speaking Tamil, English, Sanskrit, and Kannada. He was educated at Mysore University and the Deccan College in India and at Indiana University, where he received a Ph.D. in linguistics, his thesis later published as a monograph titled A Generative Grammar of Kannada. A poet in English and Kannada, a translator from Kannada and Tamil, as well as a scholar, folklorist, philologist, playwright, and essayist, Ramanujan, as Wendy Doniger once wrote, "blazed a great path through the center of Indological studies. He gave us so many new paradigms that no Indologist can now think about India without thinking through his thoughts." Ramanujan served on the University of Chicago faculty for thirty-two years and was a professor in the Department of Linguistics and of South Asian Languages and Civilizations. His accidental discovery of an anthology of classical Tamil poems in the uncatalogued basement stacks of the university's Harper Library led to The Interior Landscape. In 1976 the Government of India bestowed the title of Padma Shri, one of its most prestigious civilian awards, upon Ramanujan for his contributions to Indian literature and linguistics, and in 1983 he received a MacArthur Fellowship. A.K. Ramanujan's many publications include The Collected Poems of A.K. Ramanujan, The Collected Essays of A.K. Ramanujan, Folktales from India, Speaking of Siva, and Nammalvar: Hymns for the Drowning.