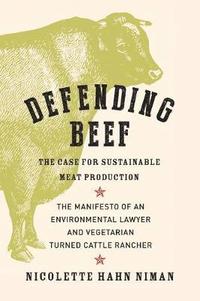 The Case for Sustainable Meat Production

For decades it has been nearly universal dogma among environmentalists and health advocates that cattle and beef are public enemy number one. But is the matter really so clear cut? Hardly, argues environmental lawyer turned rancher Nicolette Hahn Niman in her new book, Defending Beef. The public has long been led to believe that livestock, especially cattle, erode soils, pollute air and water, damage riparian areas, and decimate wildlife populations. In Defending Beef, Hahn Niman argues that cattle are not inherently bad for either the Earth or our own nutritional health. In fact, properly managed livestock play an essential role in maintaining grassland ecosystems by functioning as surrogates for herds of wild ruminants that once covered the globe. Hahn Niman argues that dispersed, grass-fed, small-scale farms can and should become the basis for American food production, replacing the factory farms that harm animals and the environment. The author-a longtime vegetarian-goes on to dispel popular myths about how eating beef is bad for our bodies. She methodically evaluates health claims made against beef, demonstrating that such claims have proven false. She shows how foods from cattle-milk and meat, particularly when raised entirely on grass-are healthful, extremely nutritious, and an irreplaceable part of the world's food system. Grounded in empirical scientific data and with living examples from around the world, Defending Beef builds a comprehensive argument that cattle can help to build carbon-sequestering soils to mitigate climate change, enhance biodiversity, help prevent desertification, and provide invaluable nutrition. Defending Beef is simultaneously a book about big ideas and the author's own personal tale-she starts out as a skeptical vegetarian and eventually becomes an enthusiastic participant in environmentally sustainable ranching. While no single book can definitively answer the thorny question of how to feed the Earth's growing population, Defending Beef makes the case that, whatever the world's future food system looks like, cattle and beef can and must be part of the solution.
Visa hela texten

"I have long wished for a single compilation with all the scientific evidence that counters the charges of the anti-beef propagandists. Well, now we have it. It's Defending Beef, The Case for Sustainable Meat Production by Nicolette Hahn Niman."--Allan Nation, The Stockman Grass Farmer "Defending Beef is full of important insights and information, things anyone who cares about food and agriculture, including vegetarians, ought to know."--Edward Behr, editor and publisher of The Art of Eating The Art of Eating- "Serious thinking about food and agriculture fills Defending Beef: The Case for Sustainable Meat Production (Chelsea Green, softcover, $19.95).The beef Nicolette Hahn Niman defends is unprocessed, raised outdoors using humane methods on pasture or range. A lawyer, married to a rancher, she started with an anti-meat bias and remains a vegetarian (seemingly from habit). She answers criticism that cattle-raising contributes to desertification, world hunger, and global warming. She presents the ecological importance of trampling by hooves - natural grasslands are a product of wild-animal grazing. The key for ranchers is well-timed pauses to let plants regrow. Problems come when grazing land is left to "rest" too long. Real environmental damage, she argues, comes from plowing up grasslands to plant crops. ... Most of her assertions come with references to scientific studies pro and con. Niman believes red meat is healthful, taking an Atkins-esque view that animal fat is not responsible for making people fat. In contrast to her own diet, she tentatively proposes: "We should eat what our bodies evolved to eat" - mainly meat and wild plants. And she ties benign methods to the highest quality beef, giving her rancher husband's view that the best taste comes from the meat of British breeds; the cattle are at least two years old and fattened on the year's best grass. Beef is ideally a seasonal meat, she argues, although she doesn't believe it harms cattle to feed them some grain." "In response to the ecological objection that cattle production produces more harm than good, biologist, environmental lawyer, long-time vegetarian and rancher, Nicolette Hahn Niman presents the case that raising cattle can in fact have many environmental benefits. These benefits, she argues, include helping to sustain grassland as well as producing nutrient efficient products for human consumption. Using scientific data, Niman argues how small-scale, grass-fed cattle operations are actually part of a long-term sustainability solution."--Food Tank, "Top 10 Books About Food in 2014" "A longtime critic of industrial agriculture and a lawyer by training, Niman mounts a lawyerly case for pasture-based beef production. She does so from an interested position. She's the wife of Bill Niman, one of the nation's most celebrated grass-based ranchers. But critics who want to dismiss Niman's advocacy on economic-interest grounds have to grapple with the mountains of evidence she brings to bear. The main ecological question that haunts grass-fed beef involves climate change. Cows emit methane, a greenhouse gas far more potent than carbon, when they burp, which is often. But by grazing, they also promote healthy, flourishing grasslands, which suck carbon from the atmosphere and store it in soil. In doing so, they convert a wild vegetation that people can't digest into a highly nourishing foodstuff. So on balance, do cows contribute to or mitigate climate change? The conventional view holds that the burps win. Niman casts more than reasonable doubt on that verdict. Citing loads of research, she argues that enteric emissions (methane from burps) are likely overstated and can be curtailed by breeding and techniques like abundant salt licks, and more than offset by the carbon-gulping capacity of intensive grazing (where farmers run dense herds through a pasture for a short time, and then give t

Nicolette Hahn Niman served as senior attorney for Waterkeeper Alliance, running their campaign to reform the concentrated production of livestock and poultry. In recent years, she has gained a national reputation as an advocate for sustainable food production and improved farm-animal welfare. She is the author of Righteous Porkchop and Defending Beef, and has written for numerous publications, including the New York Times, Los Angeles Times, HuffPost, and The Atlantic online. She lives on a ranch in Northern California with her husband, Bill Niman, and their two sons.