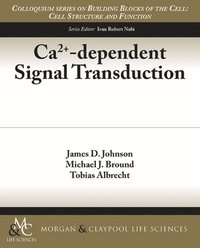 av James D Johnson, Michael J Bround, Tobias Albrecht
E-bok (PDF - DRM), Engelska, 2014-09-01
859
Ladda ned
Spara som favorit
Laddas ned direkt
Läs i vår app för iPhone, iPad och Android
In biology, signal transduction is the transmission of information into and within the cell. Signal transduction events within a cell are often initiated from an extracellular cue. Current knowledge suggests that there are far fewer intracellular second messengers than extracellular cues. This means that a conserved core set of second messengers, including ions, small nucleotides, and lipids must be coordinated to pass the information from their point of origin to their audience receptors effectively. In many cases, signal transduction involves significant amplification. One of the best-understood and ubiquitous second messengers is ionic calcium (Ca2+). The knowledge surrounding the coding of information via Ca2+ signals has served as a template for studying other second messengers. Ca2+ signaling and intracellular Ca2+ homeostasis are highly complex and still incompletely understood. In this chapter, will we review the current knowledge of Ca2+ signaling. We will first provide a review of the general principles of Ca2+ signal transduction and examples of some of the major Ca2+-dependent cellular processes. Next, we will review the main sources of Ca2+ and the molecular effectors of Ca2+ signals. Then, we will provide some examples from the literature that illustrate how Ca2+ signaling works: how it can mediate signal amplification, how it encodes different types of signals, how it performs agonist-specific signals as well as function-specific signals, signal integration and co-incidence detection, and how it can cross-talk with other second messenger signaling events. Throughout this chapter, we will use Ca2+ as an example of a prototypical coded second messenger, since it is clear that much of the complexity of Ca2+ signaling likely applies to many of the other known second messengers. Table of Contents: General Introduction / Sources of Ca2+ Signals / Ca2+-Dependent Processes: From Highly Specialized to Ubiquitous Cellular Roles / Major Ca2+-Signaling Effectors / Ca2+ Signal Coding / Acknowledgments / Bibliography / Titles of Related Interest
Visa hela texten