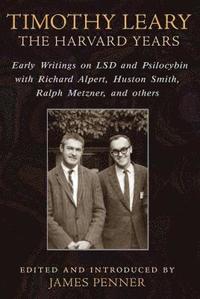 Early Writings on LSD and Psilocybin with Richard Alpert, Huston Smith, Ralph Metzner, and others

av James Penner
Häftad Engelska, 2014-08-28
209
Bevaka
Spara som favorit
Tillfälligt slut – klicka "Bevaka" för att få ett mejl så fort boken går att köpa igen.
Finns även som
Visa alla 1 format & utgåvor
On May 27, 1963, Dr. Timothy Leary and Dr. Richard Alpert were dismissed from Harvard University's Psychology Department--a watershed event marking the moment when psychedelic drugs were publicly demonized and driven underground. Today, little is known about the period in the early 1960s when LSD and psilocybin were not only legal but also actively researched at universities. Presenting the first collection of Leary's writings devoted entirely to the research phase of his career, 1960 to 1965, this book offers rare articles from Leary's time as a professor in Harvard's Psychology Department, including writings from the Harvard Psilocybin Project, the Concord Prison Project, and the Good Friday Experiment. These essays--coauthored with Richard Alpert, Huston Smith, Ralph Metzner, and other psychedelic research visionaries--explore the nature of creativity and the therapeutic, spiritual, and religious aspects of psilocybin and LSD. Featuring Leary's scientific articles and a rare account of his therapeutic approach, "On Existential Transaction Theory," the book also includes Leary's final essay from his time at Harvard, "The Politics of Consciousness," as well as controversial articles published shortly after his dismissal. With an editor's introduction examining the Harvard Drug Scandal and a critical preface to each essay, this book of seminal early writings by Leary--appearing in unabridged form--shows why he quickly became an articulate spokesperson for consciousness expansion and an iconic figure for the generation that came of age in the 1960s.
Visa hela texten

"James Penner's book Timothy Leary: The Harvard Years presents a fascinating collection of Leary's psychedelic research. Leary's contributions are of inestimable value to a new generation of investigators." * Charles S. Grob, M.D., professor of psychiatry and pediatrics at UCLA School of Medicine * "A rich and valuable resource. A wonderful glimpse into the thoughts of a fiendishly good psychologist at a crucial juncture in the exploration of psychedelics. Essential reading." * Robert Dickins, editor at Psychedelic Press * "Timothy Leary's pivotal role in 1960s drug culture often led to his being scorned and caricatured by the mass media. James Penner's superb collection of Leary's writings from his Harvard years peels away the layers of polemic and myth that surround Leary and enable us to confront his core ideas that helped to shape the counterculture. This is an important book for everyone who wants to understand Leary and the cultural rebellion of the 1960s." * Robert Cohen, professor of history and social studies at New York University * "This book is a must for any serious student of psychedelics as well as those who would like to understand the full Leary, not just the media parody version that he seemed to become in his post-Harvard years. Here he comes across as a serious scientist, a committed reformer. Penner's excellent introductions place each paper in its historical context." * James Fadiman, microdose researcher and author of The Psychedelic Explorer's Guide: Safe, Ther * "James Penner's Timothy Leary: The Harvard Years is not only a brilliant work of scholarship but a powerful and persuasive reexamination of the foundation for some of the most important and exuberant thinking of the 1960s and '70s. Penner's own admirable introductions and thorough editorial work allow us to see Leary as a radical and vital intellectual, not just a cultural phenomenon; as a writer unafraid of risks, certainly, but also able to build humane and moving research projects built on science and on hope. This is a major, long-overdue book." * James R. Kincaid, professor of English at the University of Pittsburgh and author of Child-Loving, A * "The brilliantly designed experiments that Timothy Leary and his team performed with psilocybin, LSD, and DMT between 1960 and 1963 while at Harvard's Center for Research in Personality laid the foundation for the revolution we are presently witnessing in psychedelic medicine and science. James Penner has performed a valuable service by gathering and evaluating these essential, difficult-to-find research papers while providing historical context for the academic scandal that erupted in the wake of these experiments." * Michael Horowitz, coauthor of Moksha: Aldous Huxley's Classic Writings on Psychedelics and the * "What a fantastic service James Penner provides with his collection of writings by Timothy Leary and friends in Timothy Leary: The Harvard Years. Leary emerges here . . . as a writer of great relevance today, with an earnest and passionate voice." * Sidney Homan, professor of English at the University of Florida and actor, director, and author * "This is a great book! I've always been curious about Leary's earlier, more scholarly work, which has real substance to it. I never thought about it as a focus for a book, but it's blindingly obvious now that James Penner has done it." * Marcus Boon, author of The Road of Excess: A History of Writers on Drugs and professor of English at * "...the theories and writings contained in this book are a very worthy read, and challenging for all the right reasons." * Robert Dickins, Psychedelic Press UK, October 2014 *

James Penner, Ph.D., is an assistant professor of English at the University of Puerto Rico, Rio Piedras. A graduate of Brown University and the University of Southern California, he is the author of Pinks, Pansies, and Punks: The Rhetoric of Masculinity in American Literary Culture. He lives in San Juan, Puerto Rico.