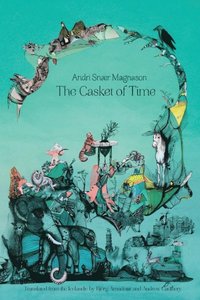 av Andri Snaer Magnason
E-bok (EPUB - DRM), Engelska, 2019-04-09
240
Ladda ned
Spara som favorit
Ladda ned och läs i en e-boksläsare. Tips på appar
Finns även som
Visa alla 1 format & utgåvor
An entrancing adventure for today's troubled planet, The Casket of Time is a fantastical tale of time travel and environmental calamity from celebrated Icelandic author Andri Snaer Magnason.Teenage Sigrun is sick of all the apocalyptic news about the &quotesituation&quote and, worse, her parents' obsession with it. Sigrun's family-along with everyone else-decides to hibernate in their TimeBoxes(R), hoping for someone else to fix the world's problems . But when Sigrun's TimeBox(R) opens too early, she discovers an abandoned city overrun by wilderness and joins a band of kids who are helping a researcher named Grace solve the &quotesituation.&quoteThe world, according to Grace, is under an ancient curse. There once was a princess named Obsidiana, who was trapped in time by the greedy king of Pangea. To protect Obsidiana from dark and gloomy days, the king put her in a crystal casket made of spider silk woven so tightly that time itself couldn't penetrate. The king's greed for power doomed his kingdom and the trapped princess. Sigrun sees eerie parallels between the tale of Obsidiana and the present-day crisis, and realizes it's up to her and her friends to break the ancient curse and fix the world.
Visa hela texten