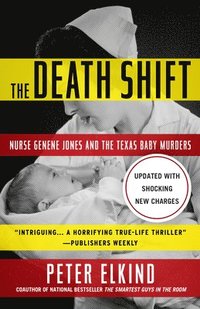 av Peter Elkind
Häftad Engelska, 2021-12-02
215
Bevaka
Spara som favorit
Ännu ej utkommen – klicka "Bevaka" för att få ett mejl så fort boken boken går att köpa.
On the heals of multiple new murder charges brought in 2018, here's an updated edition of the classic account of arguably the most shocking and insidious case in the history of medicine: the crimes of one nurse that were hidden by a hospital for years. It's 1980, and Genene Jones is working the 3 to 11 PM shift in the pediatric ICU in San Antonio's county hospital. As the weeks go by, infants under her care begin experiencing unexpected complications-and dying-in alarming numbers, prompting rumors that there is a murderer among the staff. Her eight-hour shift would come to be called "the death shift." This strange epidemic would continue unabated for more than a year, before Jones is quietly sent off-with a good recommendation-to a rural pediatric clinic. There, eight children under her care mysteriously stopped breathing-and a 15-month-old baby girl died. In May 1984, Jones was finally arrested, leading to a trial that revealed not only her deeply disturbed mind and a willingness to kill, but a desire to play "God" with the lives of the children under her care. More shocking still, it was discovered that the hospital had shredded records and remained silent about Jones's horrific deeds, obscuring the full extent of her spree and prompting grieving parents to ask: Why? Elkind chronicles Jones's rampage, her trials, and the chilling aftermath of one of the most horrific crimes in America, and turns his piercing gaze onto those responsible for its cover-up. It is a tale with special relevance today, as prosecutors, distraught parents, and victims' advocates struggle to keep Jones behind bars, despite her scheduled mandatory release from a Texas prison in early 2018.
Visa hela texten

Praise for The Death Shift "Intriguing. . . . A horrifying true-life medical thriller..." -Publishers Weekly "Gripping. . . . A remarkable journalistic achievement!" -Newsweek "Murder, madness, and medicine. . . . superb!" -Library Journal "Shocking. . . . true crime reporting at its most compelling." -Booklist Praise for The Smartest Guys in the Room: The Amazing Rise and Scandalous Fall of Enron "Powerful and shocking. . . . filled with fascinating characters and anecdotes." -New York Times Book Review "The best book about the Enron debacle to date." -BusinessWeek "The authors write with power and finesse. Their prose is effortless, like a sprinter floating down the track." -USA Today "Well-reported and well-written." -Warren Buffett Praise for Client 9: The Rise and Fall of Eliot Spitzer "An absorbing account of Spitzer's improbable journey from New York rich kid to celebrated Wall Street scourge-to infamous Client No. 9 of the Emperor's Club." -Los Angeles Times "The Eliot Spitzer story plays like a novel that might have been plotted by Theodore Dreiser and peopled with characters by Tom Wolfe. The governor of New York, aka 'Mr. Clean', aka 'the Sheriff of Wall Street', is transformed by a prostitution scandal into 'the Luv Gov' and 'Client 9.' The tireless reformer compared to Batman's alter ego, Bruce Wayne; the moralistic square, who carried a briefcase in junior high, finds his much ballyhooed future as a possible presidential contender smashed to pieces, and the word 'disgraced"'seemingly permanently stapled to his name like a Homeric epithet." -The New York Times "Even if there weren't a prostitution thread, this would be a page-turner. Elkind's style is journalism at its best: well-reported but pared down, and full of colorful scenes." -Newsweek.com "[Elkind] is a fantastic researcher who has used both his powers of persuasion and the freedom of information laws to full advantage. Readers are treated to the frantic e-mails of aides as they coped with Spitzer's foul-mouthed tirades and wild mood swings. The book also has the first interviews with the governor's favorite date from the Emperors Club prostitution ring." -Washington Post

Peter Elkind, senior reporter at ProPublica, is an award-winning investigative journalist and co-author of the national bestseller The Smartest Guys in the Room: The Amazing Rise and Scandalous Fall of Enron and Client 9: The Rise and Fall of Eliot Spitzer. He has written for The New York Times Magazine, The New Yorker, and the Washington Post. He was also associate editor at Texas Monthly, and an editor of the Dallas Observer. Elkind has been a guest on numerous radio and television programs, including "The Today Show," Nightline, CNN Newsnight, and The Charlie Rose Show. Elkind graduated from Princeton University in 1980 and now lives with his family in Fort Worth, Texas.