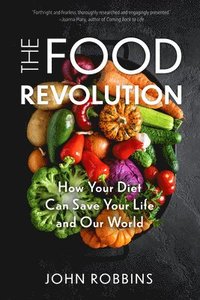 How Your Diet Can Save Your Life and Our World (Plant Based Diet, Food Politics)

av John Robbins
Häftad Engelska, 2021-03-16
237
Köp
Spara som favorit
Plant-Based Diet Benefits You Should Not Ignore "If every patient in every doctor's office read this book, it would revolutionize the health of America." -Neal Barnard, MD, president of the Physicians Committee for Responsible Medicine #1 Bestseller in Agriculture & Food Policy, Vegetables, Special Diet, Vegan & Vegetarian, Healthy Living, Personal Health, and Diets & Weight Loss A book from the over-one-million-copies-sold author who made popular the connections between diet, physical health, animal cruelty, and environmentalism. A revolution in food-politics. When John Robbins released an early version of this book in 1987, he took the first steps in the food revolution. His insight into the harm caused by America's eating habits was a wake-up call for many. Making conscious food choices. It is obvious to us that what we eat affects our bodies, but what we may not realize is that what we eat also affects our world. In fact, most of the foods that are bad for us (think genetically modified products) also negatively impact our environment. By approaching our eating habits with intentionality, we benefit our own health and that of the world we live in. Plant-based diet benefits. Arguments for a plant-based diet are compelling and backed by over 20 years of work by Robbins focused on the subject of conscious eating. Exposing the dangers in our factory farming system, Robbins makes a definitive case for solely plant-based eating. This timely read on healthy eating will enlighten those curious about plant-based diets and fortify the mindsets of the already converted. Read The Food Revolution and discover: The negative effects of your current eating habits A powerful case for plant-based eating Wisdom from one of the most frequently cited books of the food-politics revolution If you have read books such as We are the Weather, How Not to Die, 31-Day Food Revolution, or Fast Food Genocide, then The Food Revolution is a must read!
Visa hela texten

John Robbins is the bestselling author of Voices of the Food Revolution, No Happy Cows, Diet for a New America, and many other landmark works. He is the founder of EarthSave International and the co-founder and co-host of the 500,000+ member Food Revolution Network. Robbins' work has been the subject of cover stories and feature articles in The San Francisco Chronicle, The Los Angeles Times, The Washington Post, The New York Times, The Philadelphia Inquirer, and many of the nation's other major newspapers and magazines. His life and work have also been featured in an hour-long PBS special titled "Diet For A New America." The only son of the founder of the Baskin-Robbins ice cream empire, Robbins was groomed to follow in his father's footsteps, but chose to walk away from Baskin-Robbins and the immense wealth it represented to "...pursue the deeper American Dream...the dream of a society at peace with its conscience because it respects and lives in harmony with all life forms. A dream of a society that is truly healthy, practicing a wise and compassionate stewardship of a balanced ecosystem." He lives with his family in California's Santa Cruz Mountains. Dean Ornish, MD, is the founder and president of the non-profit Preventive Medicine Research Institute and Clinical Professor of Medicine at the University of California, San Francisco, and Clinical Professor of Medicine at the University of California, San Diego. Dr. Ornish was recognized as "one of the 125 most extraordinary University of Texas alumni in the past 125 years;" by TIME magazine as a "TIME 100 Innovator;" by LIFE magazine as "one of the fifty most influential members of his generation;" by People magazine as "one of the most interesting people of the year;" and by Forbes magazine as "one of the world's seven most powerful teachers."

The Food RevolutionForeword Acknowledgments Introduction to the 10th Anniversary Edition 1 Introduction: What Is the Food Revolution? PART I Food and Healing 2 Healthy Heart, Healthy Life 3 Preventing Cancer 4 The Great American Diet Roller Coaster 5 A Healthy Plant-Based Diet 6 Got BS? 7 Unsafe On Any Plate 8 Policing the Pathogens PART II Our Food, Our Fellow Creatures 9 The Pig Farmer 10 Old McDonald Had a Factory 11 Misery on the Menu 12 Eating with Conscience PART III Our Food, Our World 13 Choices for a Healthy Environment 14 Once Upon a Planet 15 Reversing the Spread of Hunger PART IV Genetic Engineering 16 Pandora's Pantry 17 Farmageddon 18 The Emperor's New Foods 19 The Turning of the Tide 20 Conclusion: Our Food, Our Future Resource Guide Notes Index About John Robbins