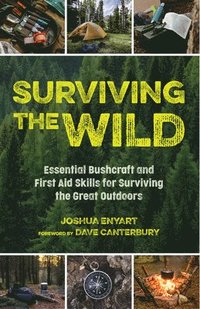 av Joshua Enyart
Häftad Engelska, 2021-07-13
269
Köp
Spara som favorit
Finns även som
Visa alla 1 format & utgåvor
The Ultimate Wilderness Survival Guide "If you are serious about survival, this book is required reading." Alan Kay, winner of Alone, season 1 (History Channel) and coauthor of Decline and Decay: Strategies for Surviving the Coming Unpleasantness #1 Bestseller in Caving & Spelunking and Hiking & Camping Instructional Former Special Forces Operator and Instructor, Joshua Enyart, provides essential skills and a step-by-step wilderness survival strategy in his debut bushcraft book, Surviving the Wild. A bushcraft survival and field guide. If you found yourself suddenly thrust into the wild without any modern conveniences like electricity, running water, wi-fi, or Google-would you know what to do? In a pandemic induced post-apocalypse, do you know what your first priority should be? If your caving, camping, or hiking adventure goes haywire, how would you ensure your survival? Written by a former Army Ranger and Green Beret, this survival book provides crucial information alongside a logical, systems-based approach to survival and preparedness. Navigation, tools, first aid, and other survival strategies for the outdoors. Consider this your essential survival guidebook to making it in the wild. With it you'll learn how to outmaneuver immediate threats, find shelter and nutrition, and navigate to where you want to go. Part first aid book, part survival handbook, Surviving the Wild contains chapters of information on making the most of minimal supplies, finding safe water, and above all-survival! Look inside and you'll find: A foreword from bestselling bushcraft author Dave Canterbury Survival medicine and edible plant identification Instructions on how to build a fire, catch game, make a shelter, and more! If you enjoyed survival books like Bushcraft 101, SAS Survival Handbook, How to Stay Alive in the Woods, or The Prepper's Medical Handbook, then you'll love Surviving the Wild.
Visa hela texten

Joshua Enyart, also known as The Gray Bearded Green Beret, is a former Army Ranger and Green Beret turned professional wilderness skills instructor, specializing in the woodlands and the mountains of the eastern United States. He has completed over a dozen tours of duty as a Special Forces Operator, on both active duty and as a private military contractor. Enyart has been a member of two Army Special Operations command units, an instructor for the Air Force and Marines branches, as well as a member of Air Force Special Operations command, Marine Corps Special Operations command, and even Naval Special Warfare. He is the creator of the popular YouTube channel The Gray Bearded Green Beret, and currently resides in the Adirondack Mountains.