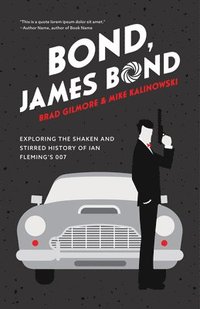 Exploring the Shaken and Stirred History of Ian Fleming's 007

av Brad Gilmore
Häftad Engelska, 2022-02-15
212
Köp
Spara som favorit
Finns även som
Visa alla 1 format & utgåvor
Breaking Down Six Decades of James Bond Movies#1 New Release in Action & Adventure Movies & Video, and Movie Reference Hosts Mike Kalinowski and Brad Gilmore team up in this comprehensive examination of the longest running film series in the history of cinema. In Bond, James Bond, they explore the cinematic history of the James Bond collection to celebrate everything it got right and reflect on everything it got wrong. The complete cinematic biographies of James Bond. Since his initial portrayal by Sean Connery, James Bond has become a timeless icon worldwide. Now, comes the first-ever era-by-era breakdown of the much loved international spy-on and off the silver screen. Following the men who portrayed James Bond-Daniel Craig, Pierce Brosnan, Timothy Dalton, Roger Moore, and Sean Connery-readers will discover the characteristics that made him resonate, as well as the less glamorous relics that made him evolve. For fans of the Ian Fleming James Bond novels and movies. Cinephiles and fans can finally unscramble some of the best action movies of all time. Covering everything from cars to court cases, Bond, James Bond looks at the evolution of the 007 movies from all angles. Featuring bonus chapters on Bond women and musical scores, inside, you'll also find: The origins of 007 in the early James Bond books Off-screen politics, drama, and movements that shifted the series trajectory The "other" James Bond, comic books, and animated series If you're looking for Father's Day gifts, gifts for men, or James Bond gifts-and enjoyed books like Some Kind of Hero, Nobody Does it Better, or Shaken-then you'll love Bond, James Bond.
Visa hela texten

"Roger Moore was always my favorite Bond. James Bond could handle a weapon, knew how to fight and always got the girl-he was the ultimate man's man! Brad and Mike excellently lay out the origins of Bond and how the character has evolved over the years. I, for one, can most certainly dig that!" -Booker T., author of My Rise to Wrestling Royalty "Brad and Mike found the perfect blend of childlike wonder and thoughtful analysis. They have knowledge and an endless array of interesting tidbits, but see everything through the eyes of the fans, which is ultimately what makes this so enjoyable." -Peter Rosenberg, Hot97 & ESPN "Eureka! Brad and Mike provide a detailed historical account to one of America's most endeared entertainment franchises!" -Cedric Duplechain, co-star on AMC's The Son, starring Pierce Brosnan "James Bond is one of the greatest movie characters of all time, and Brad Gilmore and Mike Kalinowski do an incredible job of celebrating why 007 has left such an indelible mark on pop culture, regardless of the actor playing him. From the villains, to the drinks and the gadgets, this will make you love the Bond franchise even more!" -Chris Van Vliet, four-time Emmy-Award-winning TV host

Brad Gilmore is a radio and television host born and raised in Houston, TX. Since 2011, he has been the host of The Brad Gilmore Show which covers the worlds of sports, music, and pop culture. Brad currently hosts "The Hall of Fame" with WWE Hall of Famer, Booker T on ESPN Radio. Brad began his career covering music and worked as a regular contributor to Houston Press and the hip hop blog DayandaDream.com. He hosts a variety of TV shows and podcasts including Reality of Wrestling, Movie Trivia Schmoedown, Schmoedown Rundown, Heated Conversations (featured in the iTunes Top 10 Podcast Chart), and since 2015, Back to the Future: The Podcast. During his career, Brad Gilmore has appeared in print, radio, television and film and always looks to bring his one of a kind view to each of his endeavors and entertain audiences worldwide. Mike Kalinowski is an actor and host born in upstate New York. He has appeared on shows such as Showtime's Black Monday, and The CW's Jane the Virgin, Castle, Revenge, The Vampire Diaries, and General Hospital. A walking comic book encyclopedia, Mike is one of the hosts of "DC Movie News" on Popcorn Talk for the Maria Menounos produced Afterbuzz network and has hosted numerous movie and TV podcasts for the network. He is also a veteran theme park performer of more than nineteen years for Walt Disney World, Disneyland, Sea World, the Action Horizons Stunt Team and Universal Studios in both Hollywood and Orlando. Mike is an unabashed, life-long James Bond fan, whose wealth of knowledge of the character helped him to become a 3x Champion in the Movie Trivia Schmoedown competition. He is currently based in Los Angeles, California.

Working Table of Contents: 1. I Admire Your Courage (Sean Connery Era) 2. Grand Slam (importance of Goldfinger) 3. The Other Fellow (the unbelievable story of Lazenby) 4. Good Moorening (The Roger Moore Era) 5. Quartermaster (q's best gadgets) 6. Penny & Dimes (untangling the history of the Bond women) 7. Underneath the Mango Tree (songs of Bond) 8. Perfectly Formed (the style of bond) 9. Timothy Dalton Era 10. Pierce Brosnan Era 11. Never Say Never (McClory case) 12.You Know His Name (Craig era) 13. Everything or Nothing (future of bond and growing as a character with progressive minds)