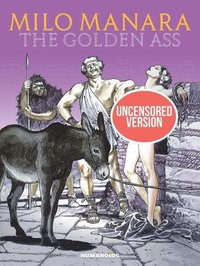 av Milo Manara
(1 röst)
Inbunden Engelska, 2022-02-03
256
Köp
Spara som favorit
The salacious graphic novel adaptation of one of classic Roman literature's most legendary stories, as told by one of eroticas' most legendary artists, Milo Manara. The adventures of a young man whose fascination with witchcraft leads him to be transformed into a donkey. Passing from owner to owner, young Lucius runs afoul of thieves, sorcerers, and beautiful women in his search for salvation. Inspired by "The Golden Ass of Apuleius," an ancient story that has inspired generations of writers, this titillating tale is a must-have for Manara fans. For mature audiences.
Visa hela texten