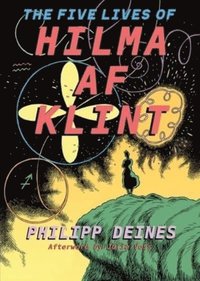 av Hilma Af Klint, Phillipp Deines, Julia Voss
Inbunden Engelska, 2022-07-14
299
Köp
Spara som favorit
A moving biography, told in vivid illustrations, this graphic novel features key moments in the life of Swedish artist and pioneer of abstract painting Hilma af Klint (1862-1944). Long-underrecognized, af Klint's sensational rediscovery continues to take art audiences by storm. Artist Philipp Deines traces the story of now world-famous af Klint's unique life and groundbreaking oeuvre through five chapters featuring her development as an artist, her family background, and her relationship to the spiritual. Highlighting how she came to her distinctive paintings, her spiritual quest, and the friends who helped her, this is a story of the strength it took af Klint to continue as an artist against all odds. Beautifully drawn, brightly colored, and well-researched, this graphic novel is a new way of looking at the story of an artist. Referencing Julia Voss's new biography of af Klint, Deines presents an accessible and lively introduction for many ages. Biography, art history, and contemporary narrative style merge and complement each other in these magnificent visual worlds.
Visa hela texten

Hilma af Klint (1862-1944) is now regarded as a pioneer of abstract art. Though her paintings were not seen publicly until 1987, her work from the early 20th century predates the first purely abstract paintings by Kandinsky, Mondrian and Malevich. Philipp Deines is an artist, illustrator, and graphic designer. In 2015 he published Behind the White Cube (Merve Verlag) with Julia Voss. In 2020 he received the Berlin Comic Scholarship and his work was exhibited in the Museum for Communication. In 2021, his work was exhibited at Grisebach in Berlin in the exhibition Stu-stu-stu-studioline. The 5 Lives of Hilma Af Klint (2022) is his first graphic novel. He lives and works in Berlin. Julia Voss is a curator, art critic, and professor. Her biography of Hilma af Klint was on the shortlist of the Leipzig Book Fair Prize in 2020 and became a bestseller. She headed the Visual Arts Department of the Frankfurter Allgemeine Zeitung for ten years and has been teaching art history as an honorary professor at Leuphana University in Luneburg since 2015. She lives in Berlin with her husband Philipp Deines and two children.