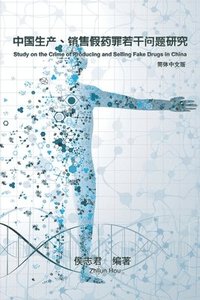 Since the promulgation of the criminal law, a series of researches and discussions have been carried out around the crime of socialist market economy. Especially the identification of fake drugs is the focus of controversy. This book is expanded from the 2015 law graduation thesis of Yulin Normal University. In the process of preparing the paper, the author has collected a wide range of materials about the crime of socialist market economy, and discussed the preparation and starting of the crime from the problem of fake drugs. At the same time, in order to demonstrate, some cases are cited and analyzed, and some cases are rewritten.

In the process of compilation of this treatise, which was encouraged and helped by many teachers all the time, such as Sheng-Rong Yang

, Shujin Lin ,Qinglong Pang and Jinsong Han. The author would like to express his heartfelt thanks one by one for these teachers. This paper collection was supported by Yulin Normal University Project No.: G2019SK08.

Zhijun Hou obtained his doctor's degree from the school of law of Tsinghua University, mainly engaged in the research of the combination of law and science and technology. He has published many SCI and EI papers and obtained 12 practical models.
Visa hela texten