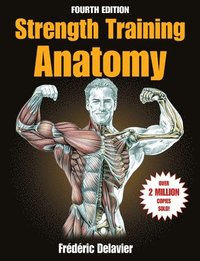 av Frederic Delavier
Häftad Engelska, 2022-09-15
318
Köp
Spara som favorit
Kan tyvärr inte levereras innan julafton.
Over two million people have turned to Strength Training Anatomy for an inside look at how the body performs during exercise. Now with new exercises, stretches, and exercise variations, and with more of Frederic Delavier's signature art, the fourth edition of this classic work sets the standard by which all other strength training resources will be judged. No other resource combines the visual detail of top anatomy texts with expert strength training advice. Over 700 anatomical illustrations, including 90 new to this edition, depict 231 exercises and variations to reveal the primary muscles involved as well as all the relevant surrounding structures, including bones, ligaments, tendons, and connective tissue. Like having an X-ray for each exercise, the anatomical depictions show both superficial and deep layers and detail how various setup positions affect muscle recruitment and emphasize underlying structures. New to this edition are stretching exercises, safety and injury callouts, and training recommendations based on body morphology. Author and illustrator Frederic Delavier is known across the world for his signature artwork and books that have been translated into over 30 languages. Now he offers you the most comprehensive edition of his master work yet with Strength Training Anatomy, Fourth Edition.
Visa hela texten

Frederic Delavier is a world-renowned author, with books published in over 30 languages, and an artist with an exceptional knowledge of human anatomy. He studied morphology and anatomy at the Ecole des Beaux-Arts in Paris as well as dissection at the Paris Faculte de Medecine. He also conducted research on comparative anatomy at the Natural History Museum in Paris and made scientific reconstructions in paleontology. His research has been published several times in the Journal of Vertebrate Paleontology. Delavier was the vice champion of France in powerlifting in 1990 and for more than 10 years was the editor of Le Monde du Muscle, the editor in chief of PowerMag magazine, and a contributor to many specialized journals and publications around the world, such as Iron Man in the United States and Men's Health in France, Germany, and Italy.