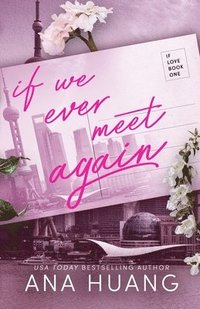 If We Ever Meet Again

av Ana Huang
Häftad Engelska, 2020-06-09
179
Köp
Spara som favorit
One year, two opposites, and a love that will blindside and, ultimately, shatter them.Farrah is a reluctant virgin and an aspiring interior designer who's stuck in a creative rut. She has enough problems without having to deal with the infuriating blond jock in her study abroad program. Sure, he's gorgeous, but he's also cocky, vain, and thinks love is a con. He can't be trusted, and she'll never fall for him...right?Blake is an (ex) college football star who quit the team and gave up his father's dreams of an NFL career to pursue his true passion, which is...well, he's not sure. But he'll figure it out-in Shanghai, far away from the stares and whispers of his Texas town. He planned on a year of freedom and getting his act together. What he didn't plan on? Falling in love.