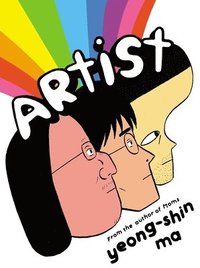 av Yeong-Shin Ma
Häftad Engelska, 2022-10-04
438
Köp
Spara som favorit
The satirical saga of three artists seeking recognition. But there can be only one Artist. A novelist, single, forty-four years old. A painter, divorced, forty-six years old. A musician, single, forty-two years old. On the outer limits of relevancy in an arts culture that celebrates youth, these three men make up the artist group Arcade. Caught in circular arguments about what makes real art and concerned about the vapid interests of their younger contemporaries, none of them are reaping the benefits of success. But there s always another chance to make it. When it comes time, out of the three, who will emerge as an acclaimed artist? More important, when one artist s star rises, will he leave the rest behind? Following Yeong-shin Ma s hit manhwa, Moms, this plunge into artistic friendships is as hilarious and infuriating as it is real. With absurdist style and off-beat humour, Artist simultaneously caricatures and complicates the figure of the artist. The friendships between the three are impassioned and mercurial, resulting in conflicts about fashion choices, squabbles with foreign children, and changes in one another's artistic fortunes for better and worse. As the story progresses we see the ways that recognition or lack thereof moulds each character s outlook, whether they will be changed by the scene or end up changing it to fit their ideals.
Visa hela texten

This wry story, drawn with pen on paper, follows three friends ? a novelist, a painter and a musician ? as they struggle with creative obstacles, daily tedium and the pretensions of their wounded egos.?New York Times. Deliciously sardonic... This portrait of jaundiced careerism and all-too-human frailties is as hilarious as it is infuriating, alternately reminiscent of Larry David and Hong Sang-soo.?Publishers Weekly. Ma s spectacular latest import... reveals?and skewers, humiliates, (partially) forgives, (reservedly) applauds?the trials and tribulations of three unfulfilled artists.?Booklist Starred Review. The realism of the main characters and their interactions with others is one of the most remarkable elements of the work.?MangaBookshelf

YEONG-SHIN MA was born in Seoul in 1982. He made his debut in 2007 and began publishing webtoon comics in 2015. Though comics publishing has moved from print to digital in Korea, he still prefers to work with pen and paper. Recently, he started running the label Bookmark for Kakao Webtoon, creating and producing webtoons, as well as working as a story artist. He has published eleven works to date. Moms, his first book to be published in English, received the Harvey Award for Best International Book and is set to be adapted as a TV series. Janet Hong is a writer and translator based in Vancouver, Canada. She received the 2018 TA First Translation Prize and the 2018 LTI Korea Translation Award for her translation of Han Yujoo s The Impossible Fairy Tale. Recent translations include Kwon Yeo-sun's Lemon, Ha Seong-nan's Bluebeard s First Wife, Keum Suk Gendry-Kim s Grass, which won the 2020 Harvey Award for Best International Book and the 2020 Krause Essay Prize, and Yeong-shin Ma's Moms, which also won the 2021 Harvey Award for Best International Book.