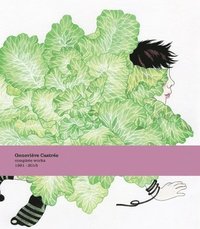 av Genevieve Castree, Phil Elverum
Inbunden Engelska, 2022-09-27
930
Köp
Spara som favorit
Finns även som
Visa alla 1 format & utgåvor
An immersive curation of Genevieve Castree s stunning life s work and expansive artistic legacy. It s not easy to label an artist like Genevieve Castree cartoonist, illustrator, musician, sculptor, stamp collector, activist, correspondent a person with busy hands and a mind too creative and wild to stop doing. Those familiar with Castree s seminal memoir about her childhood, Susceptible (included fully within), will know that she, to a large degree, raised herself. It was in those unattended, semi-feral childhood years that Genevieve used art to pull herself out of what could have otherwise been a bleak existence. Instead, she found beauty and depth around her and blended it gorgeously with the harsh, devastating realities of this world, creating a body of work that is so stunning, heartbreaking, and magical that it leaves you aching. From rarely- or never-seen illustrations and comics, to album covers and photographs, to studio scraps, Genevieve Castree: Complete Works 1981-2016 is a breathtaking collection of Castree s work and soul. A remarkable woman who made remarkable art, her love and spirit weep and shine from the pages. With an introduction from Castree s widower Phil Elverum, who devoted himself to designing and curating the book, we gain further insight into the details of her life. Translations are lovingly and expertly provided by Elverum and Aleshia Jensen.
Visa hela texten

Both newcomers and readers already in love with Castree s sui generis style will feel the vital force of her life and work. Publishers Weekly, Starred Review. [A] breathtaking collection of Castree's work and soul. CBC Books. The book is beautiful, mysterious, dreamlike as if you re being told someone else s secrets. Arpad Okay, ComicsBeat. Sorrow and elation coexist in surprising, contrary harmony in Castree s work, its evocative lines, its meditative harmonies.-The Paris Review. A masterfully understated evocation of filial love and impending loss. -Montreal Gazette. An aching clarity [is] evident in her sombre grey tones and her dexterous, serpentine lines. -Globe and Mail. Genevieve Castree: Complete Works 1981-2016 is indeed the whole journey for Castree as an artist... Here we get to see it all in unparalleled form, a curation of love and veneration and sophistication. Comics Beat

Genevieve Castree (1981-2016) was born in Quebec. Swept away by comics, she wanted to be a cartoonist from the age of nine onwards. Castree felt the urge to publish her mini-comics early, appearing in the Montreal underground scene while she was still a teenager. In addition to her books, Castree had a number of exhibitions in Canada, the United States, Europe, Australia, and Japan. Castree spent her adult life in the Pacific Northwest with her husband, Phil Elverum, and their daughter, Agathe, where she drew, made small sculptures out of porcelain, and played music under the name O PAON.