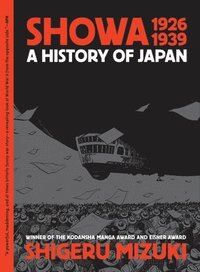 A History of Japan

av Shigeru Mizuki
Häftad Engelska, 2022-08-23
272
Köp
Spara som favorit
Finns även som
Visa alla 1 format & utgåvor
A fascinating period in Japanese history recounted by manga s most distinguished author. Showa 1926 1939: A History of Japan lays the groundwork for Eisner award-winning author Shigeru Mizuki s historical and autobiographical series about Japanese life in the twentieth century. Depicted against his trademark photorealistic backdrops, Mizuki effortlessly portrays a nation forced into a period of upheaval and brings history into the realm of the personal. Indeed, as a child coming of age in the Showa era, the author s earliest memories coincide with key events of the time. It all begins with the Great Kanto Earthquake, a natural disaster that forces the country into a financial crisis. The period leading up to World War II is thus a time of economic hardship and record unemployment. Forthright descriptions of ensuing militarization reveal Mizuki s lifelong stance as a thoughtful pacifist, critical of domestically disputed events like the Nanjing Massacre clearly painted here as an atrocity. This first volume in a four-part series is a captivating historical portrait tracking the industrial and societal developments that would come to shape Japan's foreign policy in the interwar period.
Visa hela texten

Shigeru Mizuki (1922 2015) was one of Japan s most respected artists. A creative prodigy, he lost an arm in World War II. After the war, Mizuki became one of the founders of Japan s latest craze manga. He invented the yokai genre with GeGeGe no Kitaro, his most famous character, who has been adapted for the screen several times, as anime, live action, and video games. In fact, a new anime series has been made every decade since 1968, capturing the imaginations of generations of Japanese children. A researcher of yokai and a real-life ghost hunter, Mizuki traveled to over sixty countries to engage in fieldwork based on spirit folklore. In his hometown of Sakaiminato, one can find Shigeru Mizuki Road, a street decorated with bronze statues of his Kitaro characters.