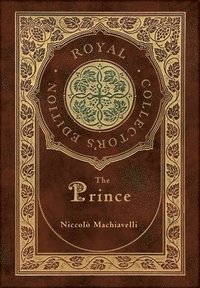 av Niccolo MacHiavelli
Inbunden Engelska, 2020-11-15
408
Köp
Spara som favorit
Machiavelli draws on his extensive historical knowledge and experience as a statesman to examine the reasons that Kings, Emperors, Dukes and governments have thrived or crumbled, while highlighting the principles that guided them. In each case Machiavelli suggests a set of principles that any leader would find difficult to follow, but impossible to ignore.

The Prince has had a profound influence on political thought over the past 500 years, so much so that the term 'Machiavellian' is used to describe one who deceives and manipulates others. This is likely derived from Machiavelli's view that "it is often necessary to act against mercy, against faith, against humanity, against frankness, against religion, in order to preserve the state." Machiavelli continues to provide an understanding of how world leaders think, and why certain decisions are made. A must read for the politically inclined and those interested in world events and the affairs of state.

Niccol di Bernardo dei Machiavelli (3 May 1469 - 21 June 1527) was an Italian diplomat, politician, historian, philosopher, humanist, writer, playwright and poet of the Renaissance period. He has often been called the father of modern political science. For many years he was a senior official in the Florentine Republic, with responsibilities in diplomatic and military affairs. He also wrote comedies, carnival songs, and poetry. His personal correspondence is renowned by Italian scholars. He was secretary to the Second Chancery of the Republic of Florence from 1498 to 1512, when the Medici were out of power. He wrote his most well-known work The Prince (Il Principe) in 1513, having been exiled from city affairs.