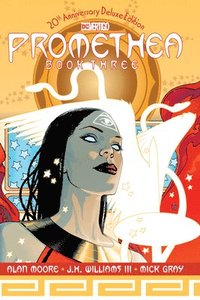 av Alan Moore
Inbunden Engelska, 2020-12-22
439
Köp
Spara som favorit
A Higher Court presents a fantastical trial in the Immateria, presided over by a strange judge and jury. Their task? To determine who shall be the one true Promethea: Stacia or Sophie. It s a battle of best friends who both happen to be Prometheas. Whichever way the fates turn, one thing is for certain: A door will close in Sophie s life. Everything must go as the landmark series nears its conclusion! This is it, the end of the story, the one that answers all the questions! Alan Moore and J.H. Williams III deliver the most gloriously experimental collection of PROMETHEA yet, in which the reader takes an incredible trip through the magical cosmos with Promethea as a guide. Collects issues #24-32.
Visa hela texten

Alan Moore is perhaps the most acclaimed writer in the graphic story medium, having garnered countless awards for works such as Watchmen, V for Vendetta, From Hell, Miracleman and Swamp Thing. He is also the mastermind behind the America's Best Comics line, through which he has created (along with many talented illustrators) The League of Extraordinary Gentlemen, Promethea, Tom Strong, Tomorrow Stories and Top 10. As one of the medium's most important innovators since the early 1980s, Moore has influenced an entire generation of comics creators, and his work continues to inspire an ever-growing audience. Moore resides in central England.