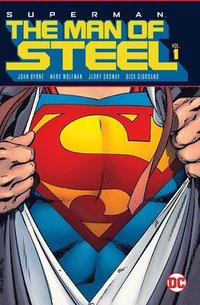 Superman: The Man of Steel Volume 1

av John Byrne
Inbunden Engelska, 2020-08-25
525
Köp
Spara som favorit
The new Metropolis! In 1986, comics history was changed forever when DC Comics recruited the heralded John Byrne to reinvent Superman and the city he calls home. This relaunch reimagine the classic characters Lois Lane and Lex Luthor and introduced new characters Cat Grant and Dr. Emil Hamilton from the prolific writer Marv Wolfman and artists Dick Giordano and Jerry Ordway. The Man of Steel must protect his beloved home from Bizarro and Metallo's catastrophic attacks, all while keeping his civilian identity a secret from the most powerful man in Metropolis, Lex Luthor. While Superman is the city's new hero, Clark Kent is still learning how to navigate daily life, especially when he meets the brilliant and beautiful television journalist Cat Grant. Despite the constant chaos in Metropolis, Superman travels to Apokolips to confront the all-powerful villain Darkseid. This volume collects the classic stories from the birth of a new era for Superman including the Man of Steel #1-6, Superman #1-4, Action Comics #584-587, Adventures of Superman #424-428, and profiles from Who's Who: Update '87.
Visa hela texten

Born in England and raised in Canada, John Byrne discovered superheroes through The Adventures of Superman on television. After studying at the Alberta College of Art and Design, he broke into comics first with Skywald and then at Charlton, where he created the character Rog-2000. Following his tenure at Charlton, Byrne moved to Marvel, where his acclaimed runs on The Uncanny X-Men and The Fantastic Four soon made him one of the most popular artists in the industry. In 1986 he came to DC to revamp Superman from the ground up, and since then he has gone on to draw and/or write every major character at both DC and Marvel.