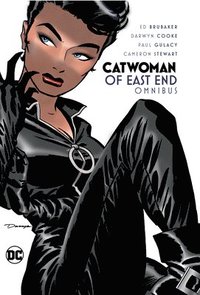 av Ed Brubaker, Darwyn Cooke
Inbunden Engelska, 2022-06-21
1056
Köp
Spara som favorit
A serial killer is racking up bodies in Selian Kyle s old haunts, taking her back to a life she thought she d left behind permanently. When Catwoman starts investigating it leads her back into the heart of the Gotham Police Department and an encounter with a face from her past Is Catwoman really ready for what s waiting for her in the dark streets of Gotham? Find out this and more in Catwoman of East End Omnibus collecting Detective Comics #759-762; Catwoman #1-37; Catwoman Secret Files #1; Catwoman: Selina s Big Score #1.
Visa hela texten

Ed Brubaker is one of the most acclaimed writers in comics, winning five best writer Eisner and Harvey awards in the last 10 years. His bestselling work with Sean Phillips on Criminal, Incognito, Fatale, and The Fade Out has been translated around the world to great acclaim, and Marvel s movies featuring his co-creation, the Winter Soldier, have all been international blockbusters. Ed lives in Los Angeles with his wife and their crazy dog, where he works in comics, film, and television, most recently on HBO s new hit series Westworld.