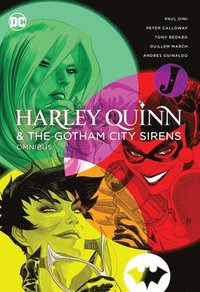 av Paul Dini, Guillem March
Inbunden Engelska, 2022-09-20
1056
Köp
Spara som favorit
This omnibus features the bad girls of Gotham City! Catwoman, Poison Ivy and Harley Quinn are tired of playing by other peoples' rules regardless of which side of the law they're on. These tough ladies have a new agenda that's all their own, and they'll use any means necessary to pursue it. But can they get along and work as a team? And who will get hurt along the way? Collects GOTHAM CITY SIRENS #1-26 and CATWOMAN #83.
Visa hela texten

Paul Dini is a multiple Emmy and Eisner Award winning writer and producer who has helped redefine the legends of the DC Universe in such series as The New Batman/Superman Adventures, Batman Beyond, Krypto, and Justice League Unlimited. In doing so, he co-created one of the most popular characters in comics in Harley Quinn, who originated as a character in Batman: The Animated Series. In comics he has authored The World's Greatest Superheroes, illustrated by Alex Ross. Dini has also collaborated with Chip Kidd on Batman Animated for HarperCollins.