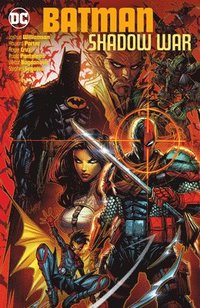 av Joshua Williamson, Howard Porter
Inbunden Engelska, 2022-11-01
423
Köp
Spara som favorit
Ra's al Ghul is dead, and Talia is out for revenge! Batman is on the case to find Deathstroke before Talia's elite killers do! But Batman starts to piece together that not everything is what it seems in Ra's's death and knows whom he must interrogate to get answers Talia herself! Can the two former lovers ever work together again? This hardcover collects all the parts of the SHADOW WAR story from Batman #122-123; Robin #13-14; Deathstroke Inc. #8-9; Shadow War: Alpha #1; Shadow War: Omega #1; Shadow War Zone #1.
Visa hela texten

Joshua Williamson lives in Portland, Oregon. His career as a comics writer kicked off in 2007, and since then he has done a number of books for Shadowline, Image, Desperado Publishing, Kick Start, and DC Comics. He has written the Uncharted limited series based on the bestselling video game, Voodoo, and Marvel's Illuminati and Red Skull. He is currently writing The Flash and Batman/Superman for DC Comics.