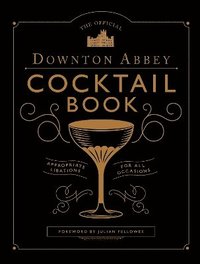 (2 röster)  |  Läs 1 recension
Inbunden Engelska, 2019-09-13
197
Köp
Spara som favorit
In official partnership with Downton Abbey and with 50 stunning photographs featuring stills from across the series and right up to the latest film release, this collection of 70 delicious cocktail recipes is a lavish toast to the glamorous world of the Crawleys. With a foreword by Julian Fellowes, the writer and creator of Downton Abbey, and an introduction by food historian Annie Gray, this curated selection of recipes spans the world of Downton, from drawing-room party drinks to downstairs hangover cures and more. In addition to classic concoctions like a Mint Julep, Prince of Wales Punch and Ginger Beer, this collection features character-specific twists such as Downton Heir, Turkish Attache, The Valet and The Chauffeur. With a brief history of each drink and peppered with quotes from Downton characters, the recipes are organized by the places the drinks were served: The library (stirred drinks and after-dinner drinks) The grounds (refreshing drinks) The great hall (party drinks) The drawing room (pre-dinner drinks and hangover helpers) The village (everyday drinks) Photographed using the original lead crystal used on set, each cocktail is guaranteed to raise your spirits, whether by channeling the verve of Lady Mary, the wit of Violet Crawley or the plain speaking of Mrs Patmore. With these cocktails, relish the rich traditions and flavours of Downton Abbey without end.
Visa hela texten

Annie Gray is an historian, cook, writer and broadcaster specialising in the history of food and dining. Annie frequently appears on television and radio, including The Great British Bake Off, Heston's Great British Food and BBC Radio 4's Kitchen Cabinet. In 2017 Annie published her first book, The Greedy Queen: Eating with Victoria. Foreword by Julian Fellowes, the writer and creator of the Emmy and Golden Globe Award-winning TV series Downton Abbey. He is also the Academy Award-winning screenwriter of Gosford Park and the author of the bestselling novels Past Imperfect and Snobs.