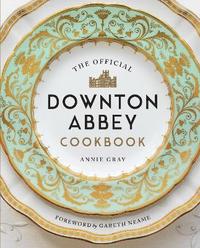 av Annie Gray
(1 röst)
Inbunden Engelska, 2019-09-13
266
Köp
Spara som favorit
Finns även som
Visa alla 2 format & utgåvor
The official cookbook based on the hit TV series seen on Netflix and around the world, discover mouthwatering recipes that will transport you into the genteel world of Downton Abbey. The Official Downton Abbey Cookbook presents over 100 recipes that showcase the cookery of the Crawley household - from upstairs dinner party centrepieces to downstairs puddings and pies - and bring an authentic slice of Downton Abbey to modern kitchens and Downton fans. Whether adapted from original recipes of the period, replicated as seen or alluded to on screen, or typical of the time, all the recipes reflect the influences found on the Downton Abbey tables. Food historian Annie Gray gives a warm and fascinating insight into the background of the dishes that were popular between 1912 and 1926, when Downton Abbey is set - a period of tremendous change and conflict, as well as culinary development. The recipes are grouped by occasion, which include breakfast; luncheons and suppers; afternoon tea and garden parties; picnics, shoots and racemeets; festivities; upstairs dinner; desserts and canapes; downstairs dinner; downstairs supper and tea; and the still room. From the upstairs dinner menu: Caviar Croutes Chicken Vol-au-Vents Cucumber Soup Trout in Port-Wine Sauce Quail and Watercress Champagne Jelly From the downstairs dinner menu: Toad-in-the-Hole Beef Stew with Dumplings Steamed Treacle Pudding Jam and Custard Tarts Gingerbread Cake With a foreword by Gareth Neame, executive producer and co-creator of Downton Abbey, and featuring over 100 stunning colour photographs, many taken on the set of Downton Abbey and using the original glassware and china, The Downton Abbey Cookbook also includes a special section on hosting Downton-themed dinner parties, and includes stills from across the TV series as well as the latest film. Notes on the etiquette and customs of the times, quotes from the characters and descriptions of the scenes in which the foods appear provide rich context for the dishes. With these and more historic recipes, savour the rich traditions and flavours of Downton Abbey without end.
Visa hela texten

Annie Gray is an historian, cook, writer and broadcaster specialising in the history of food and dining. Annie frequently appears on television and radio, including The Great British Bake Off, Heston's Great British Food and BBC Radio 4's Kitchen Cabinet. In 2017 Annie published her first book, The Greedy Queen: Eating with Victoria. Gareth Neame is Executive Chairman of Carnival Films and, alongside Julian Fellowes, responsible for the global TV phenomenon Downton Abbey