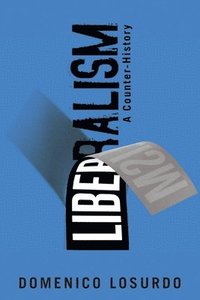 av Domenico Losurdo
(3 röster)  |  Läs 1 recension
Häftad Engelska, 2014-02-04
173
Köp
Spara som favorit
Finns även som
Visa alla 1 format & utgåvor
In this definitive historical investigation, Italian author and philosopher Domenico Losurdo argues that from the outset liberalism, as a philosophical position and ideology, has been bound up with the most illiberal of policies: slavery, colonialism, genocide, racism and snobbery. Narrating an intellectual history running from the eighteenth through to the twentieth centuries, Losurdo examines the thought of preeminent liberal writers such as Locke, Burke, Tocqueville, Constant, Bentham, and Sieyes, revealing the inner contradictions of an intellectual position that has exercised a formative influence on today's politics. Among the dominant strains of liberalism, he discerns the counter-currents of more radical positions, lost in the constitution of the modern world order.
Visa hela texten

A brilliant exercise in unmasking liberal pretensions, surveying over three centuries with magisterial command of the sources. -- Peter Clarke * Financial Times * Liberalism: A Counter-History by Domenico Losurdo stimulatingly uncovers the contradictions of an ideology that is much too self-righteously invoked. -- Pankaj Mishra * Guardian * Liberalism is far too serious to be left in the hands of the liberals. * Il Giornale * There is always something to learn from books by Domenico Losurdo. And [this book] is no exception, for the outstanding knowledge of modern and contemporary political thought, the rigorous philology and the pursuit of sources that have been forgotten or expunged. * Il Corriere della Sera * Vast historical research recommended for the depth of the 'excavation' and for the wealth of new material that emerges. * Il Sole 24 Ore * The latest, original work by Domenico Losurdo, a philosopher-historian of great lucidity, author of always innovative books ... travels through and analyzes the dark, deep and often malodorous side of liberalism. * La Stampa * Losurdo is almost unbelievably well-read * Jacobin * Losurdo chronicles the ways in which the leading theorists of liberalism aided and abetted the building up of a 'master-race democracy' in the antebellum United States and, afterwards, a world-wide 'war' waged by the northern European empires of liberty against one another and for the colonial subjection of the rest of the world. * The University Bookman * The book is a historically grounded, very accessible critique of liberalism, complementing a growing literature critical of liberalism. * CHOICE magazine * Liberals might be inclined to disregard Losurdo's work as bombastic and hyperbolic, but they would be exercising poor judgment to do so. This is not revisionist history, but history told from the point of view of those who are making it. -- Chris Byron * Marx and Philosophy Review of Books *

Domenico Losurdo is Professor of Philosophy at the University of Urbino, Italy. He is the author of many books in Italian, German, French and Spanish. In English he has published Hegel and the Freedom of Moderns, Heidegger and the Ideology of War, and Liberalism.