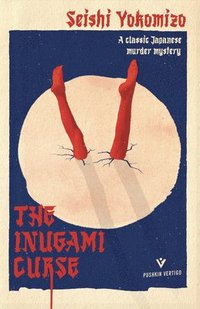 av Seishi Yokomizo
Häftad Engelska, 2020-02-06
131
Köp
Spara som favorit
Finns även som
Visa alla 1 format & utgåvor
In 1940s Japan, the wealthy head of the Inugami Clan dies, and his family eagerly await the reading of the will. But no sooner are its strange details revealed than a series of bizarre, gruesome murders begins. Detective Kindaichi must unravel the clan's terrible secrets of forbidden liaisons, monstrous cruelty, and hidden identities to find the murderer, and lift the curse wreaking its bloody revenge on the Inugamis. The Inugami Curse is a fiendish, intricately plotted classic mystery from a giant of Japanese crime writing, starring the legendary detective Kosuke Kindaichi.
Visa hela texten

"The diabolically twisted plotting is top-notch." -- The New York Times Book Review "[A] stellar whodunit. . . Yokomizo creates a palpable sense of menace throughout with grim foreshadowing of the carnage to come. The solution is a perfect match for the baffling puzzle. Fair-play fans will hope for more translations of this master storyteller." - Publishers Weekly (starred review) 'Japan's Agatha Christie . . . It's an absolute pleasure to see his work translated at last in these beautifully produced English editions.' - The Sunday Times 'This is Golden Age crime at its best, complete with red herrings, blind alleys and twists and turns galore... A testament to the power of the simple murder mystery and its enduring appeal.' - The Spectator 'One of Yokomizo's best-loved detective tales -- Kindaichi must solve a slowly growing string of gruesome murders all connected to the mighty Inugami Clan, and uncover the deeply hidden secrets of the clan along the way.' -- Metropolis Japan '2020 may be the year of Seishi Yokomizo . . . Both [The Honjin Murders and The Inugami Curse are] set in the late 1930s/early 1940s, they promise to be atmospheric, exciting and knotty whodunits. The covers alone are enough to get any fan of the genre salivating.' - Japan Times 'The master of Japanese crime.' - Tuttolibri

Seishi Yokomizo (1902-81) was one of Japan's most famous and best-loved mystery writers. He was born in Kobe and spent his childhood reading detective stories, before beginning to write stories of his own, the first of which was published in 1921. He went on to become an extremely prolific and popular author, best known for his Kosuke Kindaichi series, which ran to 77 books, many of which were adapted for stage and television in Japan. The Inugami Curse is one of Kindaichi's most famous mysteries and has twicce been adapted for film in Japan.