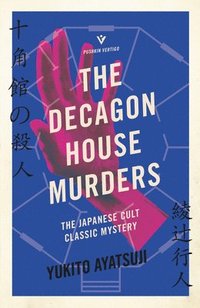 av Yukito Ayatsuji
Häftad Engelska, 2020-12-03
131
Köp
Spara som favorit
Finns även som
Visa alla 1 format & utgåvor
The Japanese cult classic mystery 'Ayatsuji's brilliant and richly atmospheric puzzle will appeal to fans of golden age whodunits... Every word counts, leading up to a jaw-dropping but logical reveal' Publishers Weekly The lonely, rockbound island of Tsunojima is notorious as the site of a series of bloody unsolved murders. Some even say it's haunted. One thing's for sure: it's the perfect destination for the K-University Mystery Club's annual trip. But when the first club member turns up dead, the remaining amateur sleuths realise they will need all of their murder-mystery expertise to get off the island alive. As the party are picked off one by one, the survivors grow desperate and paranoid, turning on each other. Will anyone be able to untangle the murderer's fiendish plan before it's too late?
Visa hela texten

"A terrific mystery, a classic of misdirection very much in the manner of Agatha Christie or John Dickson Carr'" - Washington Post "Behold, the perfect escapist drug! If I could crush this book into a powder and snort it, I would." - Vulture "A real page-turner... Highly recommended" - Classic Mystery "Ayatsuji's brilliant and richly atmospheric puzzle will appeal to fans of golden age whodunits... Every word counts, leading up to a jaw-dropping but logical reveal" - Publishers Weekly (starred review) "A stunner of a plot, with an ending which I simply could not believe when it was first revealed... Rivals Soji Shimada's The Tokyo Zodiac Murders for sheer audacity and ingenuity" - At the Scene of the Crime "A knowing tribute to classic crime, it features all manner of puzzles, including locked rooms, jigsaws and magic tricks." - Mark Sanderson, The Times "highly ingenious" - Laura Wilson, Guardian "The Decagon House Murders, is a thrilling homage to Christie's And Then There Were None, following a group of amateur sleuths on a trip to a lonely island, the site of several unsolved murders. In the opening chapter, one character remarks: "Enough gritty realism please! What mystery novels need are a great detective, a mansion, a shady cast of residents, bloody murders, impossible crimes and never-before-seen-tricks played by the murder." It's impossible not to agree." - The Guardian

Yukito Ayatsuji (born 1960) is a Japanese writer of mystery and horror novels. He started writing as a member of the Kyoto University Mystery Club, a society dedicated to the writing of fair play mysteries inspired by the Golden Age greats, which inspired the club featured in The Decagon House Murders and has nurtured many of Japan's greatest crime writers.The Decagon House Murders was Ayatsuji's debut and is considered a landmark crime novel in Japan, where it revived the traditional puzzle mystery format and inspired a new generation of writers. It is the first of Ayatsuji's works to be translated into English.