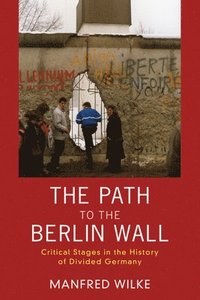 The Path to the Berlin Wall

Critical Stages in the History of Divided Germany

av Manfred Wilke
Inbunden Engelska, 2014-04-01
1047
Köp
Spara som favorit
Finns även som
Visa alla 1 format & utgåvor
The long path to the Berlin Wall began in 1945, when Josef Stalin instructed the Communist Party to take power in the Soviet occupation zone while the three Western allies secured their areas of influence. When Germany was split into separate states in 1949, Berlin remained divided into four sectors, with West Berlin surrounded by the GDR but lingering as a captivating showcase for Western values and goods. Following a failed Soviet attempt to expel the allies from West Berlin with a blockade in 1948-49, a second crisis ensued from 1958-61, during which the Soviet Union demanded once and for all the withdrawal of the Western powers and the transition of West Berlin to a "Free City." Ultimately Nikita Khrushchev decided to close the border in hopes of halting the overwhelming exodus of East Germans into the West. Tracing this path from a German perspective, Manfred Wilke draws on recently published conversations between Khrushchev and Walter Ulbricht, head of the East German state, in order to reconstruct the coordination process between these two leaders and the events that led to building the Berlin Wall.
Visa hela texten

"...constitutes a superlative model of combining biography with the study of nationalism. The latter constitutes the most novel contribution of this well-researched, straightforward historical depiction of Kohl's ideology and its impact upon the continuing development of German national identity... Recommended" * Choice

Born in 1941 in Kassel, Germany, Manfred Wilke received his PhD in economic and social sciences from the University of Bremen in 1976 and his post-doctoral degree in sociology from Freie Universitat Berlin in 1981. From 1985-2006, he was Professor of Sociology at the Berlin School of Economics, during which he participated in both Enquete Commissions of the German Bundestag on the history of the SED dictatorship. He also served as Research Director of the Research Association on the SED State at Freie Universitat Berlin from 1992-2006.

Foreword List of Abbreviations Map of Germany, 1949-89 Map of Berlin, 1949-89 Introduction PART I: THE POLARIZATION OF POSTWAR EUROPE Chapter 1. The Allied War Conferences and Europe's Postwar Order The United States of America and the Anti-Hitler Coalition's Goals for Peace: The Atlantic Charter of 1941 The Soviet Precedent in 1944 Poland and Churchill's Warning about the Iron Curtain in 1945 Yalta: Controlling Germany without Dismembering It Germany's Forced Reorientation Liberation and Occupation Rule The Question of Guilt Emerging from Catastrophe: Konrad Adenauer, Kurt Schumacher, and Walter Ulbricht Potsdam 1945 Chapter 2. New Borders for Germany Poland's Borders and the Separation of Austria and the Eastern Provinces The Demarcation Lines of the Occupation Zones Reparations Borders Berlin: The Four-Sector City Interzonal Trade: An Economic Safety Pin Holding Together the Divided Country The Interzonal Pass: First Efforts to Control Travel to and from the East The Inter-German Emigration Movement, 1945-1989/90 Chapter 3. Two German States Conflicts over the German Party System and the Democratic Elections of 1946 The Establishment of Communist Party Rule in the Soviet Zone Moscow Plans, 1944 The Soviet Military Administration and the Establishment of a Communist Party Dictatorship The German Economic Commission: Preparations to Found the New State The "Party of Power": Party Cleansing and the Stalinization of the SED The Founding of the GDR The Federal Republic of Germany: The West German State Preliminary Decisions at the Conference of Foreign Ministers, Paris, 1946 The Bizone: A Decision to Rebuild Germany Fundamental Decisions for the West German State Currency Reform and the Social Market Economy A Constituent Assembly for West Germany The Marshall Plan The European Coal and Steel Community The Founding of the Federal Republic and the German Basic Law Chapter 4. Western Integration and the Establishment of Socialism: Competing Systems in a Divided Germany The Federal Republic: Western Integration and the Reclamation of German Sovereignty The Federal Republic's Alignment to the West and Stalin's Peace Note of 1952 The GDR in 1952: "Building the Foundations of Socialism" Cementing the Zonal Border and Sealing Off West Berlin from Its Surrounding Area Building Socialism in the GDR and Relations to the Federal Republic Chapter 6. The End of the Postwar Period: The Geneva Summit and the Transition to "Peaceful Coexistence" in Germany The Geneva Summit of 1955 The Beginning of Diplomatic Relations between the Federal Republic and the Soviet Union, and the "Hallstein Doctrine" Peaceful Coexistence in a Divided Germany: The Two-State Doctrine, Plans for a Confederation, and the Rapacki Plan Sputnik and the End of America's "Massive Retaliation" Strategy Nuclear Missiles for the Bundeswehr? The Founding of the European Economic Community PART II: THE FIGHT FOR BERLIN Chapter 6. The First Berlin Crisis, 1948-49 Berlin's Historical Significance for the Division of Germany Pivotal Conflicts over Berlin's Political Order after the End of the War Berlin as a Soviet Lever to Shift the Zones of Influence in Germany The Conflict over Berlin's Currency Reform, the Blockade, and the Airlift The Division of the City The Ring around Berlin: A New Border Crisis Management as Super-Power Diplomacy Chapter 7. Stalin's Death and the First Existential Crisis of the GDR: 17 June 1953 A "New Course" for the SED The SED State's Crisis of Legitimacy: 17 June 1953 The Soviet Union Guarantees the Existence of the SED State Western Initiatives toward New Negotiations on Germany Recognit