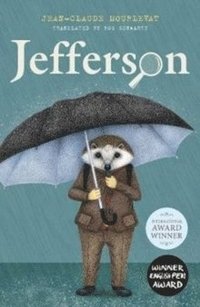 av Jean-Claude Mourlevat
(6 röster)  |  Läs 1 recension
Häftad Engelska, 2020-08-06
9-12 år
103
Köp
Spara som favorit
Winner of the PEN Translates Award Jean-Claude Mourlevat is the 2021 winner of the Astrid Lindgren Memorial Award When Jefferson the hedgehog goes to his hairdresser's, he's shocked to discover the barber lying dead on the floor. Falsely accused of murder, Jefferson must go on the run with his best friend Gilbert the pig to uncover the real killers. Adventure, dark secrets and a most unlikely series of hair-raising events await Jefferson and his fellow animals as they travel into the Land of the Humans . . . With a cover by Lisa d'Andrea, and inside illustrations by Antoine Ronzon Translated by Ros Schwartz
Visa hela texten

"[B]oth charming and instructive, fast-paced and entertaining-but, most of all, these qualities combine to deliver a powerful message about the brutal slaughter of animals for meat. This is activism in soft but deadly gloves" * Books for Keeps * "A must-read" * L'Enseignant * "Brilliantly mixes genres . . . entertaining and thought-provoking" * Telerama * "Humour, wordplay and linguistic invention serves a fable which teaches young readers that animals also have rights" * Elle * "The writing is fluid, accessible and rich . . . filled with humour and tenderness" * La Montagne *

Jean-Claude Mourlevat (Author) Jean-Claude Mourlevat was born in Ambert, Auvergne in 1952 in a farming family. He studied in Strasbourg, Toulouse, Bonn and Paris, and worked as a German teacher in college before becoming an actor. He performed as the clown character Guedoulde in a show that toured France and internationally and has also staged works by Brecht, Cocteau and Shakespeare. Jean-Claude Mourlevat turned to writing for children in the late 1990s and has since published numerous books for young readers and won several awards including the Prix des Incorruptibles and the Sorcieres Prix. In 2021 he was given the Astrid Lindgren Memorial Award. He lives near Saint-Etienne, with his wife and their two children.