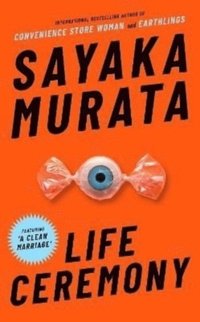 av Sayaka Murata
Häftad Engelska, 2022-07-14
156
Köp
Spara som favorit
Finns även som
Visa alla 3 format & utgåvor
From the author of international bestseller Convenience Store Woman comes a collection of short fiction: weird, out of this world and like nothing you've read before. An engaged couple falls out over the husband's dislike of clothes and objects made from human materials; a young girl finds herself deeply enamoured with the curtain in her childhood bedroom; people honour their dead by eating them and then procreating. Published in English for the first time, this exclusive edition also includes the story that first brought Sayaka Murata international acclaim: 'A Clean Marriage', which tells the story of a happily asexual couple who must submit to some radical medical procedures if they are to conceive a longed-for child. Mixing taboo-breaking body horror with feminist revenge fables, old ladies who love each other and young women finding empathy and transformation in unlikely places, Life Ceremony is a wild ride to the outer edges of one of the most original minds in contemporary fiction.
Visa hela texten

These stories laid complete claim to me. Ominous and charming. Brilliantly sad. There is not one word wasted here. I lost significant sleep over this collection -- Kiley Reid, author of Such a Fun Age Undoubtedly shocking... unnerving... bizarre and outrageous... Life Ceremony reminds us how fragile we - and the society we take for granted - really are * New Internationalist * Strangely believable, easy to read and hard to forget * Guardian *

A bestselling literary sensation, SAYAKA MURATA has won all of Japan's major literary prizes, and been named a Vogue Woman of the Year. Murata spent eighteen years working part-time in convenience stores before the success of Convenience Store Woman afforded her the freedom to write full time. She is the author of Earthlings and Convenience Store Woman, which has sold more than a million copies in Japan alone and been translated into twenty-three languages worldwide.