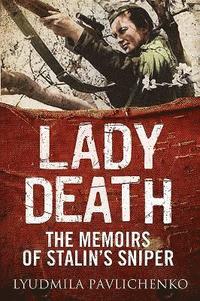 The Memoirs of Stalin's Sniper

av Lyudmila Pavlichenko
Inbunden Engelska, 2018-02-05
239
Köp
Spara som favorit
Finns även som
Visa alla 2 format & utgåvor
The wartime memoir of Lyudmila Pavlichenko is a remarkable document: the publication of an English language edition is a significant coup. Pavlichenko was World War II's best-scoring sniper and had a varied wartime career that included trips to England and America. In June 1941, when Hitler launched Operation Barbarossa, she left her university studies, ignored the offer of a position as a nurse, to become one of Soviet Russia's 2000 female snipers. Less than a year later she had 309 recorded kills, including 29 enemy sniper kills. She was withdrawn from active duty after being injured: she was also regarded as a key heroic figure for the war effort. She spoke at rallies in Canada and the US and the folk singer Woody Guthrie wrote a song, 'Killed By A Gun' about her exploits. Her US trip included a tour of the White House with FDR. In November 1942 she visited Coventry and accepted donations of 4,516 from Coventry workers to pay for three X-ray units for the Red Army. She also visited a Birmingham factory as part of her fundraising tour. She never returned to combat but trained other snipers. After the war, she finished her education at Kiev University and began a career as a historian. She died on October 10, 1974 at age 58, and was buried in Moscow's Novodevichye Cemetery.
Visa hela texten

'Lyudmila Pavlichenko's skills with a rifle are matched in this magnificent memoir by her abilities as a writer. In clear, lively prose she describes how her pre-war enthusiasm for target shooting enabled her to become one of the Red Army's most feared front-line snipers on the Eastern Front. Arguably the finest account of sniping during World War II.'--Adrian Gilbert, author of Challenge of Battle "...a very interesting look at World War II... Her story is remarkable."--Adrian Gilbert, author of Challenge of Battle "John's Notes" "Lady Death is the author's autobiography and memoir of her service in the "Great Patriotic War". Pavlichenko gives us a sniper's eye view of numerous fights, discourses on firearms and the craft of sniping, and her wartime romance and marriage that ended in tragedy. Anyone, whether a scholar with an interest in the Russian Front, the Red Army, or sniping, or the layman curious about these subjects, will find this valuable reading."--Adrian Gilbert, author of Challenge of Battle "The NYMAS Review" Starred Review: "During WWII, Pavlichenko was the Soviet Union's top female sniper with 309 recorded kills (accomplished in less than a year). In 1942 she was sent on a tour of the U.S. and Britain, lending her famous face and story to the effort to cement the allied friendship. Largely unknown to western audiences, Pavlichenko's translated memoir provides a look at the war that is wholly original and quite startling in its frankness and unique perspective. Postwar she became a historian and drew on archival research to supplement her wartime diary when she decided decades later to write about her training, combat experiences, and how she met her husband. The couple served together in the Ukrainian woods and he died there, in her arms, breaking her heart forever. Lady Death reads like a novel, and it is a rare war story by a patriot whose determination to fight for her country is inspiring and should firmly put to rest any doubts about women in combat. There is no question that this is a significant historical document, but it is also a gripping narrative (which includes her memories of travel in the U.S.) that devotees of history, especially WWII, should absolutely not miss."--Adrian Gilbert, author of Challenge of Battle "Booklist" This illuminating memoir will interest readers seeking insights into the Soviet soldier experience, the U.S.S.R.'s relationships with its allies, and the role of women in Soviet Russia and its military--and even readers uninterested in those topics will enjoy spending time in Pavlichenko's company.--Adrian Gilbert, author of Challenge of Battle "Publishers Weekly, May" "For once, a sniper memoir that goes far beyond a catalogue of kills. Lyudmila Pavlichenko writes from the viewpoint of a trained historian, and so Lady Death -- in addition to being a very good read -- not only gives a broad perspective of the campaigns in which she fought but also the political background into which she had to blend."--John Walter, author of Snipers at War "Lyudmila Pavlichenko, the highest scoring female sniper to come out of the Red Army, provides an intimate portrayal of the struggles and obstacles Red Army combatants faced and overcame as the war on the Eastern Front unfolded. She not only proved herself on the field of battle, but also was one of the few Soviet citizens allowed to campaign for the war effort abroad and as such offers an additional, unique view of the west through a Soviet veteran's eyes."--Yan Mann, Military Historian "Within a year after the launching of Operation Barbarossa, Hitler's invasion of Russia in June 1941, a 24-year-old Kiev female history student enlisted in the Russian Army and became one of the deadliest military snipers of all times, in any army, in any war. Lady Death is Lyudmila Pavlichenko's taut and gritty memoirs of the "most dangerous woman in

Lyudmila Pavlichenko was one of the top scoring snipers of World War II with 309 recorded kills. She died on October 10th 1974\. Martin Pegler was curator of firearms at the Royal Armouries for twenty years and during his career shoot almost every historic and current sniping rifle. He is the author of a dozen books about firearms, but specialises in the development sniper and technology of sniping. He lives in France with his wife.