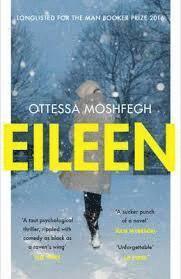 Shortlisted for the Man Booker Prize 2016

av Ottessa Moshfegh
Häftad Engelska, 2016-08-18
112
Köp
Spara som favorit
Finns även som
Visa alla 1 format & utgåvor
*SHORTLISTED FOR THE MAN BOOKER PRIZE* **FROM THE AUTHOR OF TIKTOK SENSATION MY YEAR OF REST AND RELAXATION** Trapped between caring for her alcoholic father and her job as a secretary at the boys' prison, Eileen Dunlop dreams of escaping to the big city. In the meantime, her nights and weekends are filled with shoplifting and cleaning up her increasingly deranged father's messes. When the beautiful, charismatic Rebecca Saint John arrives on the scene as the new counsellor at the prison, Eileen is enchanted, unable to resist what appears to be a miraculously budding friendship. But soon, Eileen's affection for Rebecca pull her into a crime that far surpasses even her own wild imagination. 'Fully lives up to the hype. A taut psychological thriller, rippled with comedy as black as a raven's wing, Eileen is effortlessly stylish and compelling' The Times *SHORTLISTED FOR THE CWA NEW BLOOD DAGGER AWARD*
Visa hela texten

Fully lives up to the hype. A taut psychological thriller, rippled with comedy as black as a raven's wing, Eileen is effortlessly stylish and compelling. -- Robert Douglas-Fairhurst * The Times * A sucker punch of a novel, full of fury and disgust, heart-wrenching in places, a masterclass in mood and tone. Eileen is a fantastic creation and a surprisingly satisfying antidote to the dozy and complacent heroines of much so-called literary fiction. -- Julie Myerson An unforgettable new American voice. * Los Angeles Times * The great power of this book...is that Eileen is never simply a literary gargoyle; she is painfully alive and human, and Ottessa Moshfegh writes her with a bravura wildness that allows flights of expressionistic fantasy to alternate with deadpan matter of factness... As a character study, the book is a remarkable tour de force... As an evocation of physical and psychological squalor, Eileen is original courageous and masterful. Moshfegh never panders. -- Sandra Newman * Guardian * A seductive novel...Moshfegh writes beautiful sentences. One after the other they unwind - playful, shocking, wise, morbid, witty, searingly sharp. The beginning of this novel is so impressive, so controlled yet whimsical, fresh and thrilling, you feel she can do anything. * New York Times *