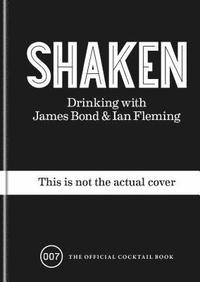 av Ian Fleming
Inbunden Engelska, 2018-09-06
204
Köp
Spara som favorit
Finns även som
Visa alla 1 format & utgåvor
The 007 official cocktail book - created in association with the Ian Fleming Estate Explore Bond creator Ian Fleming's writings on the pleasures of drinking and sample 50 delicious cocktail recipes inspired by his work - developed by award-winning bar Swift. Cocktails are at the glamorous heart of every Bond story. Whether it's the favoured Martini, which features in almost every book, or a refreshing Negroni or Daiquiri, strong, carefully crafted drinks are a consistent feature of the Bond novels. Recipes are divided into five categories: Straight Up; On The Rocks; Tall; Fizzy; and Exotic. Sip on inventions such as Smersh, Moneypenny, That Old Devil M and Diamonds are Forever, as well as classic Bond cocktails such as the Vesper and, of course, the Dry Martini. Each recipe is accompanied by extracts from Fleming's writings - be it the passage where the classic drink was featured or a place, character or plot that inspired one of the drinks. Also features Ian Fleming's writings on whisky, gin and other spirits. Foreword by Fergus Fleming.
Visa hela texten

Ian Fleming Ian Fleming was a British author and journalist. His first novel, Casino Royale (1953), introduced the spy hero James Bond, agent 007, to the world. It was the first of the James Bond books that together have gone on to sell over 100 million copies worldwide, in more than 40 languages. Beginning with the movie adaptation of Dr No in 1962, the series also sparked the longest- running film franchise in history. Both Fleming and his fictional counterpart have become synonymous with style, glamour and thrilling adventures. Fleming was born in London in 1908. Inthe 1930s he worked at Reuters news agency before joining Naval Intelligence as anofficerduring the Second World War. His talent for writing fastand engaging prose, along withhis knowledge of espionage and fertile imagination led to James Bond's creation. He also wrote the children's classic Chitty Chitty Bang Bang. Fleming was married to Ann Rothermere with whom he had a son, Caspar. He died in 1964. www.ianfleming.com Swift In 2016 Edmund Weil (who is related to Ian Fleming) and his wife Rosie Stimpson teamed up with bar industry legends Bobby Hiddleston and Mia Johansson to open Bar Swift in Soho's Old Compton Street. Edmund and Rosie have an exemplary track record in hospitality, having previously opened Nightjar and Oriole, both of which are listed in The World's 50 Best Bars. Likewise, over the years Bobby and Mia have built a reputation as purveyors of some of the world's finest cocktails, having worked previously in globally renowned venues such as Milk & Honey, Dead Rabbit and Callooh Callay. The combination of beautiful and welcoming interiors, outstanding hospitality and delicious and innovative cocktails have seen this Soho hotspot take home 'Best New Bar' at the Time Out London Bar Awards as well as the much coveted 'Best New International Cocktail Bar' at Tales of the Cocktail 2017, all within a year of its opening. www.barswift.com