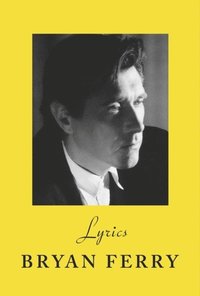 The definitive collection of the Roxy Music frontman's iconic lyrics

av Bryan Ferry
Inbunden Engelska, 2022-05-05
208
Köp
Spara som favorit
Finns även som
Visa alla 1 format & utgåvor
**A Sunday Times bestseller** ___________ Celebrate the 50th anniversary of Roxy Music's iconic first album with this collection of Bryan Ferry's evocative lyrics of aspiration and romantic longing, introduced by the author. 'Lyrics is a book any Roxy fan would be proud to have on their shelf' The Telegraph Bryan Ferry's work as a singer and songwriter, both as a solo artist and with Roxy Music, is legendary. Lyrics collects the words written for music across seventeen albums, from the first iconic Roxy album of 1972 via the masterpiece of Avalon to 2014's reflective Avonmore, introduced by the author, and with an insightful essay by James Truman. All the classic Roxy anthems are here - 'Virginia Plain', 'Do the Strand', 'Love is the Drug' - songs in which the real and the make-believe blend in a kaleidoscopic mix, shot through with cinematic allure. Also included are the evocative lyrics of romantic longing and lost illusions for which Ferry is rightly revered: 'Slave to Love', 'Mother of Pearl', 'More Than This'. As he writes in his preface, 'The low points in life so often produce the most keenly felt and best-loved songs.' And, it might be added, some of the best poetry. Discover this unforgettable collection of Bryan Ferry's work today.
Visa hela texten

Lyrics is a book any Roxy fan would be proud to have on their shelf * Daily Telegraph * There is something arresting seeing Ferry's words laid out in black type on the white page... the layout of Lyrics offers an elegant simplicity that allows these lines to breathe * Record Collector *

Bryan Ferry (Author, Introducer) Bryan Ferry is a singer, songwriter and co-founder of the group Roxy Music, with whom he wrote and recorded eight acclaimed albums. He has released numerous solo albums and is widely regarded as one of the most innovative and influential recording artists of all time. In 2011 Ferry was awarded a CBE and in 2012 received the French national honour of l'Ordre des Arts et des Lettres. In 2014 he was made an Honorary Doctor of Music by Newcastle University. Roxy Music were inducted into the Rock and Roll Hall of Fame in 2019.