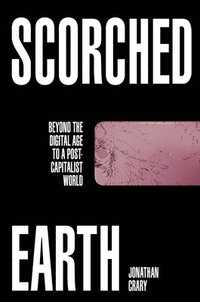 Beyond the Digital Age to a Post-Capitalist World

av Jonathan Crary
Inbunden Engelska, 2022-04-12
132
Köp
Spara som favorit
Finns även som
Visa alla 2 format & utgåvor
Refusing the digital world of late capitalism In this uncompromising essay, Jonathan Crary presents the obvious but unsayable reality: our "digital age" is synonymous with the disastrous terminal stage of global capitalism and its financialisation of social existence, mass impoverishment, ecocide, and military terror. Scorched Earth surveys the wrecking of a living world by the internet complex and its devastation of communities and their capacities for mutual support. This polemic by the author of 24/7 dismantles the presumption that social media could be an instrument of radical change and contends that the networks and platforms of transnational corporations are intrinsically incompatible with a habitable earth or with the human interdependence needed to build egalitarian post-capitalist forms of life.
Visa hela texten

Praise for 24/7: A polemic as finely concentrated as a line of pure cocaine. * Los Angeles Review of Books * Praise for 24/7: A dark, brilliant book. -- Michael Hardt * Artforum * Praise for 24/7: 24/7 is the capstone of Crary's archeology of the spectacle and arguably the most significant of the lot. It's informed by the erudition of one of the most thorough and original researchers on the planet. * PopMatters * Praise for 24/7: Jonathan Crary updates Marcuse's One-Dimensional Man with a vigilant critique of the totality of the seemingly eternal present. -- McKenzie Wark, author of The Spectacle of Disintegration At last a book about the urgency to find a way out from a system that has crossed a threshold of irreparability and toxicity. A book that is simultaneously desperate and refreshing. -- Franco "Bifo" Berardi Following on 24/7: Late Capitalism and the Ends of Sleep, Jonathan Crary here confirms his position as our most ruthless critic of all that exists. With a hammer of critical theory, he smashes the golden calf around which our lives revolve: the very internet itself. His sentences come packed with urgent truths long felt but only now articulated with the force they deserve. His clear-sightedness is the gift of prophets. -- Andreas Malm A passionate denunciation of the destructive character of capitalist technology, built on evidence drawn from every corner of the world, Scorched Earth is a major contribution to the reclaiming of our radical imagination and the creation of a new internationalism. -- Silvia Federici In an era in which there is an overarching prohibition on wishes other than those linked to individual acquisition, accumulation, and power, Crary's book resonates for his refusal to accept the idea that this is how we must live our lives. -- Alexandre Leskanich * Political Quarterly * Scorched Earth presents a piercing critique of Western techno-consumer culture and the innumerable digital landscapes now created by the internet...Crary's essay comes at a critical juncture in understanding the effects and consequences in continuing to entertain the fantasies of 24/7 capitalism. -- Henry Powell * Theory, Culture, and Society * Crary wants to jar people out of the widespread faith that because we've grown accustomed to the internet, and because we've allowed it to infiltrate nearly every hour of our lives, and because it may be hard to imagine a future without the internet, therefore the internet should and will endure...thought-provoking and sobering. -- Bart Hawkins Kreps * Resilience * And as easily as man uses the advances of technology for the good of humanity, he has at the same time created a technological arsenal in the service of a toxic capitalist grid that breeds wars, as Jonathan Crary states in his book Scorched Earth. * The Art Newspaper * Scorched Earth by Jonathan Crary, has a multiple-entendre title - he's describing what the internet is doing to society, he's describing what capitalism's long trajectory is doing to the Earth, and he's writing in a style that can only be characterized as a scorched-earth approach to the platitudes that dominate our contemporary lives...Rarely do authors address our common predicament with the fine-tuned anger and precise rhetorical scalpel of a skilled surgeon working on the body politic. -- Chris Carlsson * The Fabulist *

Jonathan Crary is Meyer Schapiro Professor of Modern Art and Theory at Columbia University and is a founding editor of Zone Books. His publications include Techniques of the Observer, Suspensions of Perception and 24/7.