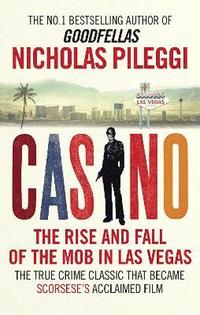 The Rise and Fall of the Mob in Las Vegas

av Nicholas Pileggi
(1 röst)
Häftad Engelska, 2015-08-13
161
Köp
Spara som favorit
Kan levereras innan julafton!
Finns även som
Visa alla 1 format & utgåvor
The Stardust... The Fremont... The Marina. They ran them all. And they lost. Big time. No one knew more about casinos than Frank 'Lefty' Rosenthal, the gambling mastermind who, along with his best friend and partner, Anthony 'the Ant' Spilotro, virtually ran Las Vegas for the mob. For years it was the perfect arrangement - Lefty provided the smarts, while Tony kept the bosses happy with weekly suitcases filled with millions in skimmed cash. It should have lasted forever but Lefty's obsessions with running the town - and Tony's obsession with Lefty's beautiful showgirl wife, Geri - eventually led to betrayals and investigations that exploded into one of the greatest scandals in mob history. Casino is the shattering inside account of how the mob finally lost its stranglehold on Las Vegas, the neon money-making machine it had created.
Visa hela texten

Nicholas Pileggi has been a journalist and writer covering crime, politics and corruption in New York since 1956. In 1986 he wrote 'Wiseguy' which he developed into the Academy Award-winning screenplay for 'Goodfellas' (1990) with Martin Scorsese. Pileggi followed that success with 'Casino' (1995) (also with Scorsese) and has since written and produced several other crime-based films and TV. He was married to fellow author and screenwriter Nora Ephron until her death in 2002.