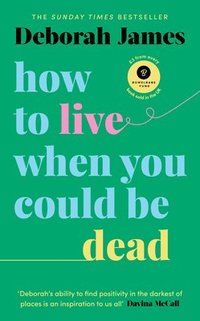 How to Live When You Could Be Dead

av Deborah James
Inbunden Engelska, 2022-08-18
153
Köp
Spara som favorit
Finns även som
Visa alla 3 format & utgåvor
The Sunday Times No.1 Bestseller 'Deborah James has captured the heart of the nation' - The Duke and Duchess of Cambridge @KensingtonRoyal 'Brave, bright, beautiful' - Lorraine Kelly 'Deborah's ability to find positivity in the darkest of places is an inspiration to us all' - Davina McCall 'This book has shaken me awake. I gulped it down in one sitting, then sat and cried... [But] hope is a character on every single page' - Christie Watson I was alive when I should have been dead. In another movie, I missed the sliding door and departed this wondrous life long ago. Like so many others, I had to learn to live not knowing if I have a tomorrow, because, statistically, I didn't. At the age of 35, I was blindsided by incurable bowel cancer - I was given less than an 8 per cent chance of surviving five years. Five years later, my only option was to live in the now and to value one day at a time. How do you turn your mind from a negative spiral into realistic and rebellious hope? How do you stop focusing on the why and realise that 'why not me' is just as valid a question? When Deborah James was diagnosed with incurable bowel cancer at just 35, she learned a powerful lesson: the way we respond to any given situation empowers or destroys us. And with the right skills and approach, we can all face huge challenges and find strength and hope in the darkest of places. How to Live When You Could Be Dead will show you how. It will awaken you to question your life as if you didn't have a tomorrow and live it in the way you want to today. By harnessing the power of positivity and valuing each day as though it could be your last, you'll find out, as Deborah did, that it is possible to live with joy and purpose, no matter what. Ebury, a division of Penguin Random House, will pay GBP3 from the sale of each copy of How To Live When You Could Be Dead by Deborah James sold in the UK to Bowelbabe Fund for Cancer Research UK. Cancer Research UK is a charity registered in England and Wales (1089464), Scotland (SC041666), Isle of Man (1103) and Jersey (247).
Visa hela texten

Dame Deborah James dedicated her life to helping others... with this book she will reach so many more, providing rebellious hope to the darkest of nights, and quite possibly changing how we think about death forever * Chrissie Watson, bestselling author of The Language of Kindness *

Deborah James worked in education for 15 years as a deputy head teacher, where she led national research into growth mindset in schools. At the age of 35, life with her young children and husband was thrown upside down when she was diagnosed with stage 4, incurable bowel cancer. She responded by starting a blog, 'bowel babe', which became the award-winning, weekly column in The Sun, 'Things Cancer Made Me Say'. Over the five years that followed, she dedicated herself tirelessly to fundraise, challenge taboos and raise awareness of cancer, cheered on by over 700k followers on Instagram (@bowelbabe), and presented chart-topping podcasts 'You, Me and the Big C' for BBC's Radio 5 Live and 'The Good Stuff', which she hosted with her children. In May 2022, Deborah was personally awarded a damehood by the Duke of Cambridge.