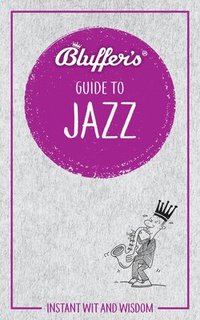 av Paul Barnes, Peter Gammond
Häftad Engelska, 2018-06-04
83
Köp
Spara som favorit
Instantly acquire all the knowledge you need to pass as an expert in the world of jazz. Never again confuse your corn with your jam, your mouldy fig with your funky smelly, or your hep with your hip. Bask in the admiration of your fellow enthusiasts as you explain the difference between bebop and hard bop, and pronounce confidently about the provenance of the word 'jazz' (and, indeed, 'boogie'). Written by experts and offering readers the opportunity to pass off appropriated knowledge as their own, the Bluffer's Guides provide hard fact masquerading as frivolous observation in one witty, easy read.
Visa hela texten

Paul Barnes took up the trumpet at the age of 11, and while at art school he played in the Weary City Stompers (WC, for short). He has worked as a presenter on BBC Radio 4's Today, The World at One and Woman's Hour, among others, and continues to dispense his blend of rhythm and rhubarb weekly - some say weakly - on the BBC Radio jazz and blues programme The Late Paul Barnes. Peter Gammond was an infant prodigy, playing the gramophone at the age of three and revealing a natural winding action that was the admiration of all who beheld it. He is now acknowledged as one of the country's leading gramophone players, as well as the author of an excessive number of books on music.