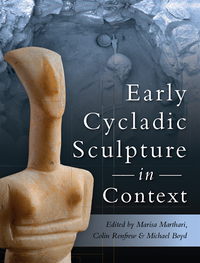 av Marissa Marthari, Colin Renfrew, Michael Boyd
E-bok (EPUB - DRM), Engelska, 2017-01-04
289
Ladda ned
Spara som favorit
Laddas ned direkt
Läs i vår app för iPhone, iPad och Android
Finns även som
Visa alla 1 format & utgåvor
The sculpture of the early bronze age Cyclades has been systematically studied since the time of Christos Tsountas at the end of the 19th century. But that study has been hampered by the circumstance that so many of the subsequent finds come from unauthorised excavations, where the archaeological context was irretrievably lost. Largely for that reason there are still many problems surrounding the chronology, the function and the meaning of Early Cycladic sculpture. This lavishly illustrated and comprehensive re-asssement sets out to rectify that situation by publishing finds which have been recovered in controlled excavations in recent years, as well as earlier finds for which better documentation can now be provided. Using the material from recent excavation projects, and drawing on the papers presented at a symposium held in Athens in 2014, it is possible now to undertake a fresh overview of the entire body of sculpture from the Cycladic islands which has been found in secure archaeological contexts. Beginning with early examples from Neolithic settlement sites and extending into a consideration of material found in later contexts, the 35 chapters are divided into sections which examine sculpture from settlements, cemeteries and the sanctuary at Kavos, concluding with a discussion of material, techniques and aspects of manufacture.
Visa hela texten