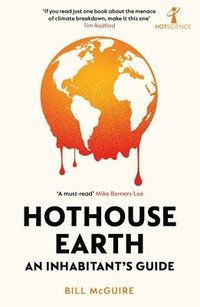 av Bill McGuire
Häftad Engelska, 2022-07-28
124
Köp
Spara som favorit
Finns även som
Visa alla 1 format & utgåvor
'It's a paradox but this was one of the most chilling books I've read this year. It's the definitive guide to where we're heading' ANTHONY HOROWITZ 'The Earth is already in a dangerous phase of heating. Many scientists admit privately to actually being "scared" by recent weather extremes. But the public doesn't like pessimism, so we environment journalists hint at future optimism. This book provides a more steely-eyed view on how we can cope with a hothouse world.' - ROGER HARRABIN, former BBC Environment Analyst 'This accessible and authoritative book is a must-read for anyone who still thinks it could be OK to carry on as we are for a little bit longer, or that climate chaos might not affect them or their kids too badly.' MIKE BERNERS-LEE is a professor at Lancaster University, founder of Small World Consultancy and author of There is No Planet B: A Handbook for the Make or Break Years 'If you read just one book about the menace of climate breakdown, make it this one.' - TIM RADFORD, Climate News Network We inhabit a planet in peril. Our once temperate world is locked on course to become a hothouse entirely of our own making. Hothouse Earth: An Inhabitant's Guide provides a post-COP26 perspective on the climate emergency, acknowledging that it is now practically impossible to keep this side of the 1.5 DegreesC dangerous climate change guardrail. The upshot is that we can no longer dodge the arrival of disastrous, all-pervasive, climate breakdown that will come as a hammer blow to global society and economy. Bill McGuire, Professor of Geophysical and Climate Hazards, explains the science behind the climate crisis and for the first time presents a blunt but authentic picture of the sort of world our children will grow old in, and our grandchildren grow up in; a world that we catch only glimpses of in today's blistering heatwaves, calamitous wildfires and ruinous floods and droughts. Bleak though it is, the picture is one we must all face up to, if only to spur genuine action - even at this late stage - to stop a harrowing future becoming a truly cataclysmic one.
Visa hela texten

It's a paradox but this was one of the most chilling books I've read this year. It's the definitive guide to where we're heading ... * Anthony Horowitz * The publication of Bill McGuire's latest book, Hothouse Earth, could not be more timely. Appearing in the shops this week, it will be perused by sweltering customers who have just endured record high temperatures across the UK and now face the prospect of weeks of drought to add to their discomfort. * Robin McKie, The Observer * Volcanologist McGuire zeroes in on 'the core issues at the heart of the climate emergency' in this urgent survey. ... This blunt and sobering look at climate change packs a punch. * Publishers Weekly * Ironically, it's never been harder telling the full truth about the climate emergency. That truth is so shocking. So painful. It invites rejection. But there can be no authentic hope for a better world without that truth being unflinchingly spelled out. Thanks then to Bill McGuire for doing exactly that in Hothouse Earth - and for still leaving us with plenty of reasons to be hopeful - just so long as we get our shit sorted without any further delay. -- Jonathon Porritt, environmental campaigner and author of Hope in Hell: A Decade to Confront the Climate Emergency There's a climate emergency on and our leaders haven't understood just how serious it is. In this concise book, Professor Bill McGuire expertly lays out the scale of the threat in very clear terms - including how much damage we have already done. He points out just how little time we have left to stop the climate crisis engulfing human civilisation. Every decision maker in government, business and wider society should read this book - and then act as fast as possible to reduce carbon pollution to zero. -- Dr Stuart Parkinson, executive director, Scientists for Global Responsibility Hothouse Earth might accurately be described as a bit of a grim read, but there is no hyperbole here. Everything in Prof. McGuire's book is solidly based upon peer-reviewed research and current observations. McGuire wants us to face up to the facts; when one does so, then one has no choice any longer. Then, grim is the point; and actually, grim is the way. For, only if we get people to feel less shy and embarrassed about talking and hearing grim do we stand a chance ... For, only if we are ready to be real about our predicament have we any hope of measuring up to it. If you are after light reading, or just want to put on a happy face, don't buy this book. Only those ready for a strict diet of truth should dare open it. Hothouse Earth is an easy to understand and authoritative reference source for all things climate science. It is a very, very, sobering read. If our so-called leaders were to read it, they would adapt. They would change (or else we must change them for others up to the job). Why not buy them a copy? -- Rupert Read, Associate Professor of Philosophy at the University of East Anglia and former spokesperson and strategist for Extinction Rebellion. His new book, Why Climate Breakdown Matters is published in August 2022 It is rare indeed, for a top scientist to spell out with blunt honesty the hell that we are heading into. Bill McGuire is one of the very few. -- Roger Hallam, co-founder of Extinction Rebellion and co-author of This is Not a Drill: An Extinction Rebellion Handbook Professor Bill McGuire has a rare talent for presenting authoritative and complex information in writing that is both accessible and enjoyably fluid. His book is convincing and passionate - an invaluable guide for those who are relatively new to the issue of climate breakdown and a useful revisor for those of us who have been reading the science for many years. -- Brendan Montague, editor of the Ecologist Taut, calmly told and truly terrifying - and there's no arguing with the science. If you read just one book about the menace of climate breakdown, make it this one. -- Tim Radford, Climate News Network A compellin

Bill McGuire is Professor Emeritus of Geophysical and Climate Hazards at University College London, a co-director of the New Weather Institute and was a contributor to the 2012 IPCC report on climate change and extreme events. His books include A Guide to the End of the World: Everything You Never Wanted to Know and Waking the Giant: How a Changing Climate Triggers Earthquakes, Tsunamis and Volcanoes. His first novel, Skyseed - an eco-thriller about climate engineering gone wrong - was published in 2020. He writes for many publications, including the Guardian, The Times, the Observer, New Scientist, Science Focus and Prospect and is author of the Cool Earth blog on Substack. Bill lives, runs (sometimes) and grows fruit and veg in the wonderful English Peak District, where he resides with his wife Anna, sons Jake and Fraser and cats Dave, Toby and Cashew.