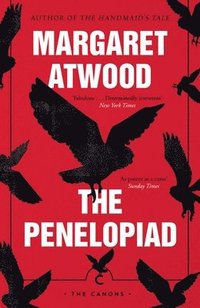 av Margaret Atwood
(2 röster)
Häftad Engelska, 2018-04-05
125
Köp
Spara som favorit
Penelope. Immortalised in legend and myth as the devoted wife of the glorious Odysseus, silently weaving and unpicking and weaving again as she waits for her husband's return. Now Penelope wanders the underworld, spinning a different kind of thread: her own side of the story - a tale of lust, greed and murder. The Myths series brings together some of the world's finest writers, each of whom has retold a myth in a contemporary and memorable way. Authors in the series include Karen Armstrong, Margaret Atwood, A.S. Byatt, David Grossman, Natsuo Kirino, Alexander McCall Smith, Philip Pullman, Ali Smith and Jeanette Winterson.
Visa hela texten

As potent as a curse * * Sunday Times * * Fabulous . . . Determinedly irreverent * * New York Times * * A witty desecration . . . Atwood plays with vigour and ingenuity * * Observer * * Atwood takes Penelope's part with tremendous verve . . . she explores the very nature of mythic story-telling -- MARY BEARD * * Guardian * * Pragmatic, clever, domestic, mournful, Penelope is a perfect Atwood heroine * * Spectator * * Half Dorothy Parker, half Desperate Housewives * * Independent * * Atwood and all authors named above are able to grasp the female experience perfectly in myths dominated by men, creating beautifully rounded and realistic characters from those created as ornaments and prizes by Homer * * The Courier * *

Margaret Atwood is the author of more than forty books of fiction, poetry and critical essays. In addition to the classic The Handmaid's Tale, her novels include Cat's Eye, shortlisted for the Booker Prize, Alias Grace, which won the Giller Prize in Canada and the Premio Mondello in Italy, The Blind Assassin, winner of the 2000 Booker Prize and Oryx and Crake, shortlisted for the Man Booker Prize. She was awarded the Prince of Asturias Prize for Literature in 2008. In 2017, The Handmaid's Tale was adapted for an Emmy-nominated TV series and Alias Grace was adapted into a Netflix Original.