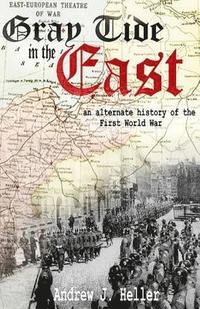 Gray Tide In The East

An alternate history of the first World War

av Andrew J Heller
Häftad Engelska, 2017-11-27
158
Köp
Spara som favorit
August 1, 1914, Berlin: Kaiser Wilhelm II cancels the German invasion of Belgium over the objections of his generals, sending his armies East against Russia instead of West to France, and sets off a chain of events that will radically change the course of modern history.

Gray Tide in the East is the best-selling counterfactual history of the First World War, if the Germans had not invaded Belgium in 1914 and thereby brought Great Britain and, eventually, the United States into the war. The carefully researched story is told by a host of real historical figures both famous (William Jennings Bryan, Winston Churchill) and obscure (Albert Dawson, Joost van Vollenhoven) and spans the globe from Washington, D.C. to Hanoi, from bloody battlefields to the secret chambers of diplomats.

AMAZON reviews for the 1st Edition:

A superbly written alternate history without aimless fantasy, but rather a meticulously researched, and completely plausible chain of events.

Highly recommended to history lovers to exercise the mind.

A great work of counter factual history. The author knows how to tell a good story. Highly recommended.

This is a well written and believable alternate history book.
Visa hela texten