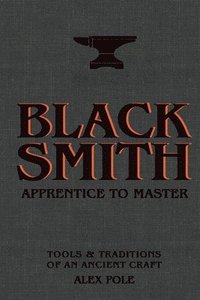 Apprentice to Master: Tools & Traditions of an Ancient Craft

av Alex Pole
(1 röst)
Inbunden Engelska, 2021-11-11
209
Köp
Spara som favorit
Born from fire and forge, Blacksmith is an exploration into the life and practices of the modern smith, and the history and folklore of this ancient art. Alex Pole guides the uninitiated on a journey from apprentice to master. Celebrating tools and traditions, from the humble nail to the history of the axe, he shares his passion and wealth of knowledge as a blacksmith to allow you a glimpse behind the steam- and smoked-filled scenes of life at the forge. Through sparks, fire and heat, delve into fascinating detail about the technique and skill that is required to master this age-old trade, and in the process discover a new appreciation of everyday objects and the people who bring them into existence. Beautifully designed and richly illustrated, Blacksmith is an essential guide to this timeless craft.
Visa hela texten

Alex Pole has always had a fascination with metals. From sitting with his mum watching her make jewellery as a four year old, to casting lead soldiers in his pre-teens, he has always been drawn to these materials. In 2006 he established Alex Pole Ironwork, which is known for its production of high quality functional products for the home and garden. It has slowly evolved over the years to specialise in hand forged kitchenware and utensils which led him to establish Forge Kitchenware in 2015. The primary aim of the forge is to promote blacksmithing, and the makers movement and to show its relevance in the 21st century.