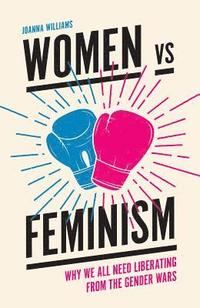 Why We All Need Liberating from the Gender Wars

av Joanna Williams
Häftad Engelska, 2017-10-10
246
Köp
Spara som favorit
Finns även som
Visa alla 2 format & utgåvor
There's never been a better time to be a woman. Thanks to those feminists who fought for liberation, young women today have freedom and opportunities their grandmothers could barely have imagined. Girls do better at school than boys and are more likely to go to university. As a result, women are taking more of the top jobs and the gender pay gap has all but disappeared. Yet rather than encouraging women to seize the new possibilities open to them, contemporary feminism tells them they are still oppressed. Women vs Feminism: Why We All Need Liberating from the Gender Wars challenges this stance, unpicking the statistics from the horror stories to explore the reality of women's lives. It argues that today's feminism is obsessed with trivial issues - skinny models, badly phrased jokes and misplaced compliments - and focuses on the regulation of male behaviour, rather than female empowerment, pitching men and women against each other in a never-ending gender war that benefits no-one. Feminism today does women no favours and it's time we were all liberated from the gender wars.
Visa hela texten

The joy of reading Joanna Williams's writing is that you quickly realize that she represents a rare combination. She knows her feminist theory inside out, and yet she also sees immediately where contemporary feminism becomes misguided and pernicious. -- The Conservative Woman "refreshing and engaging" - Times Literary Supplement "A thoughtful critique of modern feminism." - The Quarterly Review "For those of us who've been involved in fighting for women's liberation for years, it has been tragic to watch contemporary feminism become the enemy of freedom. Do not despair. Joanna Williams's wonderful book not only uses erudition, philosophy and polemics to explain how on earth this betrayal has happened but more importantly it is a bravura clarion call urging women to throw off the shackles of hapless victimhood and instead take control of their destiny. I loved every word." - Claire Fox, Director, Institute of Ideas "Women vs Feminism is a superb expose of today's victim feminism. It tells the story of how a once valiant movement for equality and freedom devolved into a male-bashing grievance-fest. This meticulously researched book will drive the gender activists crazy--and delight those who care about truth, rules of evidence, and genuine liberation." - Christina Hoff Sommers, Author of Who Stole Feminism? The author critiques feminism, views it as demonizing men and degrading women by treating them as victims, and raises questions about the direction and purpose of feminism today. She argues that girls are doing better at school than boys, they are entering higher education in greater numbers than men, they are getting degrees in more subjects, and they have better employment prospects, while the gender pay gap has narrowed. She explores the impact of feminism on education; the experiences of women at work and problems with viewing the workplace through gender; the gender pay gap, its politicization, and problems with it; and why women are more likely to choose part-time work. She discusses the difference between women's progress at school and work and the perception of their lives, particularly how the view of women as victims creates a focus on women as oppressed, arguing that this claim has little meaning today. She considers men's and women's private relationships and how feminism moved from celebrating sexual liberation to seeking to regulate sex and relationships by focusing on sexual harassment, pornography, and rape culture, removing women's sexual agency; the consequences of problematizing and policing heterosexuality and masculinity; and the changing nature of campaigns for women's rights from the 19th century through second-wave feminism in the 1970s, subsequent ideas about intersectionality and identity politics, and the consequences of the move toward identity politics for feminism and what it means to be a woman. -- Annotation (c)2017 * (protoview.com) *