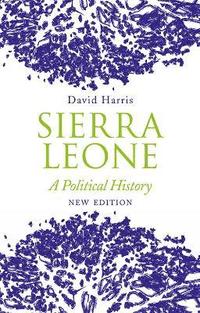 av David Harris
Häftad Engelska, 2020-11-26
272
Köp
Spara som favorit
Finns även som
Visa alla 3 format & utgåvor
Sierra Leone came to world attention in the 1990s when a catastrophic civil war linked to the diamond trade was reported globally. This fleeting and particular interest, however, obscured two crucial processes in this small West African state. On the one hand, while the civil war was momentous and brutal, affecting all Sierra Leoneans, it was also just one element in the long and faltering attempt to build a nation and state, given the country's immensely problematic pre-colonial and British colonial legacies. On the other, the aftermath of the war precipitated a huge international effort to construct a 'liberal peace', with mixed results, and interrupted by the devastating Ebola pandemic. This made Sierra Leone a laboratory for both post-conflict and health crisis interventions. Sierra Leone examines over 230 years of its history and sixty years of independence, placing state-society relations at the centre of an original and revealing investigation of those who have tried to rule or change Sierra Leone and its inhabitants, and the responses engendered. It interweaves the historical narrative with sketches of politicians, anecdotes, the landscape and environment and key turning-points, alongside theoretical and other comparisons with the rest of Africa. It is a new contribution to the debate for those who already know Sierra Leone and a solid point of entry for those who wish to.
Visa hela texten

'Harris weaves a story of fascinating detail -- vivid sketches of key figures in the country's political history, and of the topography and personality of its capital Freetown -- alongside big political themes of state-building, war and regional power politics. This is a rich introduction not only to Sierra Leone but to the politics of Africa and its place in the world.' -- Julia Gallagher, Lecturer in International Politics, Royal Holloway, University of London * Julia Gallagher, Lecturer in International Politics, Royal Holloway, University of London * 'David Harris provides an insightful and nuanced focus on the deep history of governance in Sierra Leone - but his imaginative analyses are applicable well beyond that country alone. In this sober analysis, Harris warns that uncritical and overly optimistic analyses of elections can conceal a politics of patronage and that building stable governance can have little to do with what most people associate with democratic governance. Sierra Leone uses the real history of governance in that country to expose the dangers of wishful thinking on the part of the international community while showing the real mechanisms through which governance in this and other post-conflict countries is really transformed.' * Will Reno, Professor of Political Science, Northwestern University, and author of Warfare in Independent Africa * 'This is the first general history of Sierra Leone to take account of the civil war of 1991-2002. Clearly written and well organised, it is the best single introduction to its subject now available.' * Stephen Ellis, author of This Present Darkness: A History of Nigerian Organised Crime * 'David Harris has written what will undoubtedly be seen as one of the most enlightening books on Sierra Leone. The book draws on a variety of sources to provide the reader with a clear and compelling account of Sierra Leone's political history. Its strengths are two: first, it offers an analysis that cuts through the complexities of the country's history; and second, it sets the history of colonial and post-colonial Sierra Leone within the relevant African context. This is not an exhaustive account of the minutiae of one country's history but a most useful comparative account of what happened there. This book should be of great use to students of Sierra Leone, whether new to the subject or seasoned observers of this West African country.' * Patrick Chabal, Chair in African History and Politics, King's College London * 'Drawing on more than a decade of research, David Harris's chronicle of Sierra Leone's political history provides a riveting explanation and analysis of the country. David traces Sierra Leone's transition from colonial rule to post-war democracy with impressive succinctness while maintaining a scrupulous care to avoid the pitfall of stereotype. With each chapter, the reader is given further insight into the myriad of factors which helped bring together the fabric of Sierra Leone's modern political identity. This book is a must read for political analysts and the individual seeking an adept and up to date account of the politics of Sierra Leone.' * Almami I. Cyllah, Africa Regional Director, International Foundation for Electoral Systems * 'In Sierra Leone: A Political History, David Harris convincingly draws out the policy implications of continuity and change in state-society relations. In doing so the book presents a nuanced critique of current liberal reform and democratisation in "post-conflict" societies. This is an empirically rich text with thoughtful conceptual reflection, one which does well to situate its arguments in a broader comparative-historical context. It will provide an excellent introduction to new scholars of Sierra Leone and is sure to stimulate discussion among development practitioners.' * Chris Suckling, Department of Geography and Environment, London School of Economics * 'This tidy book, despite its subtitle, is not a conventional

David Harris is Lecturer in African Studies at Bradford University and specialises in West African politics. He is the author of Civil War and Democracy in West Africa: Conflict Resolution, Elections and Justice in Sierra Leone and Liberia.