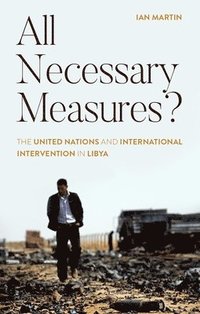 The United Nations and International Intervention in Libya

av Ian Martin
Inbunden Engelska, 2022-04-28
365
Köp
Spara som favorit
Finns även som
Visa alla 1 format & utgåvor
The international intervention after the 2011 Libyan uprising against Muammar Gaddafi was initially considered a remarkable success: the UN Security Council's first application of the 'responsibility to protect' doctrine; an impending civilian massacre prevented; and an opportunity for democratic forces to lead Libya out of a forty-year dictatorship. But such optimism was soon dashed. Successive governments failed to establish authority over the ever-proliferating armed groups; divisions among regions and cities, Islamists and others, split the country into rival administrations and exploded into civil war; external intervention escalated. Ian Martin gives his first-hand view of the questions raised by the international engagement. Was it a justified response to the threat against civilians? What brought about the Security Council resolutions, including authorising military action? How did NATO act upon that authorisation? What role did Special Forces operations play in the rebels' victory? Was a peaceful political settlement ever possible? What post-conflict planning was undertaken, and should or could there have been a major peacekeeping or stabilisation mission during the transition? Was the first election held too soon? As Western interventions are reassessed and Libya continues to struggle for stability, this is a unique account of a critical period, by a senior international official who was close to the events.
Visa hela texten

'A judicious, thoughtful analysis.' -- Foreign Affairs 'The value of this work is that it explains all the intricate challenges of working in a post-dictatorial conflict zone. It shows contrary to tabloid-style journalism that few decisions were easy or obvious, a warning to sofa critics who have never had to face such tasks.' -- The New Arab '[A]n excellent analysis of the key issues during the war and in the post-Gaddafi period, when the main proponents of military intervention, Britain and France, were accused of abandoning Libya and allowing militias to subvert the process of trying to unify the country under democratic rule.' -- Middle East Eye 'Although Martin focuses on an intervention that took place over a decade ago, his masterful explanation of what the international community got right and especially what it got wrong transcends Libya and will remain relevant for years to come. 'All Necessary Measures?' should be required reading at war colleges, diplomatic academies, humanitarian NGOs, and the U.N.' -- Just Security '[A] sober judge of events in Libya... [Martin] provides timely and carefully considered context for understanding what happened in 2011 and beyond.' -- Declassified UK 'Ian Martin's book is aimed at academics and policy makers. It will be invaluable to the former, and it contains valuable lessons for the latter.' -- British Association of Former United Nations Civil Servants 'Ushering the reader to a front-row seat in closed-door decision-making, Martin punches through myths and politicization obscuring the realities of Libya's 2011 uprising. His exciting but cautionary account provides essential lessons that transcend the international role in Libya.' -- Jeffrey Feltman, former US Assistant Secretary of State for Near Eastern Affairs, and former UN Under-Secretary-General for Political Affairs 'Martin was "in the room where it happened." He makes an important addition to the literature on Libya not only because of his acute analysis of the international response to the 2011 revolution, but also because he was a key player in the months that followed.' -- Lindsey Hilsum, International Editor, Channel 4 News, and author of Sandstorm: Libya from Gaddafi to Revolution 'In this lucid overview of the crucial first year of post-Gaddafi Libya, Martin reflects on the legacy of the international intervention that facilitated it. An honest and urgent read for all those still working on the "day after" in Libya.' -- Elham Saudi, co-founder and Director of Lawyers for Justice in Libya 'Judicious, tempered and with the sophistication that only a seasoned international practitioner can bring, this far surpasses any previous evaluation of events in Libya. Drawing valuable lessons from the Libyan intervention for the international community and the UN, this is a must-read for anyone trying to gauge the possibilities and limits of similar future ventures.' -- Dirk J. Vandewalle, Associate Professor of Government, Dartmouth College, and author of A History of Modern Libya 'The book we have been waiting for: a balanced, fair and critical assessment of the origins and early trajectory of the international intervention and engagement in Libya in 2011-12. Essential reading for anyone interested in the challenges and dilemmas of military intervention in response to humanitarian emergencies and the defence of human rights.' -- Mats Berdal, Professor of Security and Development, King's College London

Ian Martin has led UN human rights and peace operations in countries including Rwanda, Timor-Leste, Nepal and Libya. A former Amnesty International secretary-general, in 2011-12 he was Secretary-General Ban Ki-moon's post-conflict planning adviser, then UN support mission head, for Libya. His publications on UN intervention include Self-Determination in East Timor.